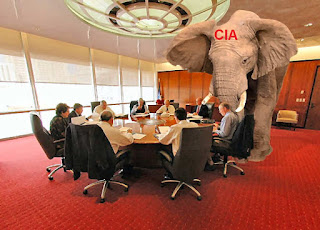 I understand that the judge in the Surrey Pressure cooker fraud entrapment case will render her decision on the entrapment argument July 27th if not sooner. June 17th the Vancouver Sun reported that "B.C. Supreme Court Justice Catherine Bruce says she must confront 'the elephant in the room' to decide the fate of a Surrey couple found guilty of terrorism for the 2013 Canada Day plot. The question, she said, was not whether, without the elaborate RCMP sting, the heinous scheme would have occurred but whether John Nuttall and Amanda Korody were even capable of it. Bruce feared that without police help 'not (that the pair) wouldn’t have committed, but couldn’t have committed' the planned bombing at the legislature."

Although that is very true, if one takes 30 seconds to actually look at the evidence it is crystal clear that without CSIS' assistance and pressure, this couple would not have even conceived of such a heinous plot let alone attempt it. It is also crystal clear that without CSIS' help they could not have done it either, That is not debatable. It is an obvious fact. Without CSIS' help and pressure there was no means or motive to commit this crime. That is entrapment. As I have said before, if the legal definition of entrapment exists in law, there has never been a more clear case of entrapment in the history of the earth. RCMP Terrorist Quotas have got to go.

Now to address the elephant in the room the judge refers to. If you say there is an elephant in the room, you mean that there is an obvious problem or difficult situation that people do not want to talk about. Indeed there is. Its' called CSIS. CSIS is in contempt of court for refusing to abde by a court order to hand over documents. That alone is grounds for a dismissal of the charges.

During the trial we were told that CSIS was directly involved with this entrapment. They didn't just pass on a tip to the RCMP like they claimed. They set the whole con up from day one. They also had help. In the beginning of the trial counsel for the defense stated American authorities were also involved in the entrapment. Big surprise.

So just what American Intelligence agency are we referring to? We have heard about many cases in the US where the FBI have foild a FBI terror plot. Bill Tieleman reported that “James Cromitie (was) a low-level ex-drug dealer who converted to Islam. A well-paid FBI informant befriended the Walmart worker and promised him $250,000 and a new BMW car to fire Stinger surface-to-air missiles at U.S. military planes and plant bombs at Jewish targets in New York.” Why would they do that? Without the FBI there was no means or motive to commit that crime.

Back to the elephant. We know the FBI only works within the United states while the CIA works outside of the United States. That is their respective mandated jurisdiction. So if American Intelligence agencies were operating on Canadian soil and helped set up this entrapment case it was the CIA. Since the Gary Webb story has been confirmed and validated a hundred times since his murder, it is clear that the CIA has been deeply involved in drug trafficking since the Vietnam war through Iran contra right up to Operation Fast and Furious. Perhaps that is something Canadian drug enforcement agents should be looking at.

The RCMP and the CBC reported that CSIS had a handler that helped plan the Air India bombing and actualy provided the explosives for that heinous attack. CSIS still need to be charged in that murder. That is the elephant in the room we cannot ignore that nobody wants to talk about.