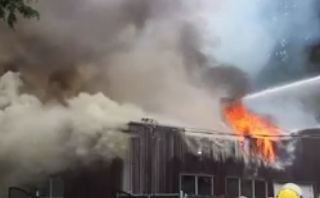 The Vancouver Sun is reporting that a fire swept through a legal grow op in Langley thursday morning and that there appears to have been a person sleeping in the grow-op who fled the scene when firefighters arrived. The CFSU busted several grow ops in Mission tied to the Hells Angels a few years ago. In 2013 there was another legal grow op in Surrey that burned down. The owner claimed it was tied to the Hells Angels and they burned it down after he tried to raise the rent.

People claim legalizing drugs will take it out of the hands of organized crime but that simply is not true. Exotic dancing is legal and that didn't stop the Hells Angels from using violence to take over that industry in BC. Drugs and prostitution is legal in Amsterdam and that certainly didn't stop them there. The Hells Angels were accused of using bully power to extort the owners of the Yab Yum brothel into selling it to them for far less than what it was worth.

The question we need to ask is if the legal grow op in Langley that burned down on thursday was tied to the Hells Angels. Perhaps it wasn't. Maybe that's why it was burned down. Like I said I have no problem with the black door or if the Hells Angels run a few grow ops. My problem is them saying no one else is allowed to have a grow except us and if you do run a grow you have to pay a tax to us or have an accident. That is complete bullsh*t. I believe in a free market. People should go to the Hells Angels because they have a quality product at a fair price not because they shot and killed all the competition.