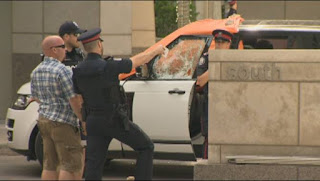 The Toronto Star is reporting that "a man was slain in a brazen midday shooting on Tuesday near one of Toronto’s busiest intersections. Cowbell Lane, an alleyway behind the Minto Towers tucked south of the Yonge St. and Eglinton Ave. E. intersection, was the scene of a gruesome homicide. A man was shot multiple times while in his car, a white Range Rover. He was pronounced dead at the scene." Global posted a news clip.

That happened today. Sunday the Toronto Star reported more shootings and stabbing over the weekend and stated that a 10-year-old boy was recovering from a gunshot wound to the shoulder after a bullet flew through a window in his public housing unit was expected Sunday to be released from hospital in the coming days."

In April it was reported that Fatal shootings in Toronto now double this time last year.

Update: Kim Bolan is reporting that the victim in Tuesday's daytime shooting in Toronto was former Vancouver gang associate Sukh Deo. The Deos were affiliated with the original Independent Soldiers before they were taken over by the Hells Angels after the Loft Six shooting.

2nd Update: It appears that Sukh Deo survived and supported the changeover in leadership of the Independent Soldiers which turned them into a Hells Angels puppet club. In the printed edition of Thursday's Vancouver Province they ran a picture of Sukh Deo posing with Don Lyons and Larry Amero. Not something Bicky or Peter Adiwal would do but was something Randy Naicker did. Kim Bolan wrote the article and has the picture posted on her blog.

The Independent Soldiers were originally an Indo Canadian gang and were independent. After the Loft Six shootings most of the original leaders were killed off or converted to become patch lickers. Randy Naicker obviously converted as he was posing with Larry Amero showing the Hells Angels support and endorsement of the new changeover. All of a sudden numerous buff white guys on steroids started to join. That's when they started writing the name Independent Soldiers on their forearms in distinctive script. That was the new puppet club's trademark.

Say what you want about Kim Bolan but she did break that story. The cub pack thing is a real smoke and mirror distraction from the obvious. The Hells Angels took over the leadership of the Independent Soldiers just like they used the Bacon Brothers to take over the leadership of the Red Scorpions in the Surrey Six. Both the Red Scorpions and the Independent Soldiers sell drugs for the Hells Angels just like the Alkhalils.