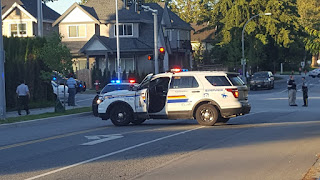 Surrey Alerts reported that there was a drive by shooting at 60th Avenue and 128th street today.

Update: The Surrey Now is reporting that A 21-year-old man showed up at a local hospital suffering from a gunshot wound Monday night, roughly 40 minutes after a shooting in Newton.

2nd Update: Front Page of the Vancouver Province is the headline about a family dog being shot dead in a surrey drive by shooting. Like I always say, here in Canada, never mind human genocide, if you cut down a tree or kick a dog you're in big trouble. Never mind all the people who have been shot. Now that they shot a dog all of a sudden everyone is pissed.

The Abby News is reporting that "Three men are in custody and facing charges after shots were fired into a vehicle early Wednesday morning in Abbotsford."

CBC is reporting that one man is in hospital after a shooting in New Westminster Thursday morning in the 300 block of Carnarvon Street.