Steven Seagal thinks a lot of mass shootings are engineered 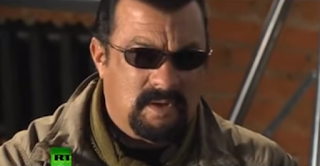 Speaking of the US Constitution Steven Seagal gave a powerful interview outlining exactly what he thinks about that sacred document. In the video he states “I believe in the second amendment and our constitution more than anything in the world, and I think that Adolf Hitler - for example - when he wanted to annihilate the people of Germany - the first thing he did was to take away their guns. And the right to bear arms wasn’t just to protect the people from foreign invaders, it was to protect them from evil governments, and anyone that would violate their inherited rights as human beings.” He continues, “I believe that and I hate to say this, a lot of these mass murders and all this funny stuff that’s going on, I believe a lot of this is engineered.”

A lot of us think it but he actually came right out and said it. There have been a lot of dramatic mass shootings that are absolutely bizarre from Sandy Hook to San Bernardino. In Sandy Hook Anderson Cooper of CNN was caught using a green screen in the funeral interview. Movies use green screen to add special effects. Anderson Cooper worked two summers for the CIA before becoming a reporter. In San Bernardino witnesses claim there was more than one shooter.

Likewise in the recent Orlando shooting some things simply don't add up. Reports are coming in that the shooter was himself gay. Witnesses claim he had attended the club previously on more than one occasion. The biggest inconsistency in that case is the number of people shot and the number of rounds fired. 49 people dead, 53 people injured and a firefight with police. That's a lot of reloading for one AR and one handgun. Logic would declare there was more than one shooter in Orlando just like in the San Bernardino case. Do I think it's possible that the CIA orcastraited this horific event and blamed it on one of the vctims they shot? Yes I do.

I'm not going to get into a pissing match over this because this is serious. I'm just going to throw it out there because I can and should. Something needs to be said.

The purpose of a false flag attack is to sway public opinion. As soon as the Orlando shooting happened, Hillary Clinton and Eric Holder, two criminals who sold the Mexican cartel guns during Operation Fast and Furious, launch a public campaign in support of gun control. Big Surprise.