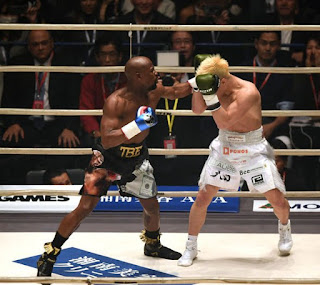 ESPN is reporting that "Floyd Mayweather dusted off the boxing gloves and stopped Japanese kickboxer Tenshin Nasukawa in the first round of their three-round welterweight exhibition match on New Year's Eve. Mayweather, 41, a former five-division world champion, floored Nasukawa three times before the end of the first round. Nasukawa's corner threw in the towel after the third knockdown, and the 20-year-old was left in tears after being humbled by the retired Mayweather."

It was an undefeated kickboxer fighting a boxer with boxing rules which once again reaffirms that guys who can't make it in boxing, go into kickboxing. Boxers have that art mastered. Hat's off to Floyd Mayweather. A champion with class unlike the pathetic loser that turned the UFC into WWF trash with his tasteless racism. A video clip of this fight has been posted on Twitter.