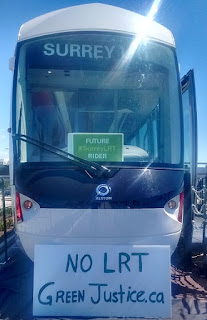 Well the Post Media Propaganda is still flogging a dead horse. Harold Munro's cheap tabloid of corporate trash is reporting that "Members of TransLink’s Mayors’ Council voted to have staff begin planning for a SkyTrain project down Fraser Highway." Three cheers. "Last month the council, at the request of the City of Surrey, suspended work on the planned $1.65-billion light rail line, which was fully funded by three levels of government."

So now, Richmond Mayor Malcolm Brodie claims Surrey taxpayers should pay back the money spent on LRT pre construction. Malcolm Brodie can go f*ck himself. You can't con a con. We live here. We know what was done and what wasn't done. They didn't do any LRT pre construction work. That is a lie. The only thing they did was rip up a salmon spawning creek at Bear Creek Park under King George Highway and fortify it so it will be able to hold the weight of an LRT. The work is still needed for when we run Sky train to Newton so nothing was for naught.

The only other "Pre construction" work on the LRT was revamping the underground water pipes at 104th Avenue and 148th Street. That really didn't have anything to do with the LRT and was work needed anyways. Widening 105th Avenue between 148th Street and 150th street was also included in the LRT costs but it had nothing to do with the LRT so we're all good. There is no pre construction LRT bill. If anything Linda Hepner and Surrey First need to be sued civilly for any outstanding funds for proceeding with a project they knew the residents opposed.

Malcolm Brodie was the clown who tried to introduce English only signs in Richmond of all places. Give your head a shake. Maybe he should repay those court costs out of his own pocket.