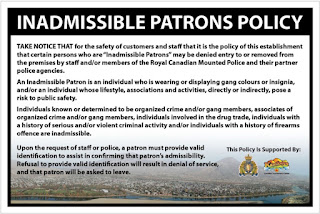 The Surrey Now Leader is reporting that "Police and bar/restaurant operators in Surrey are launching an Inadmissible Patrons Program, or IPP, in an effort to further support public safety and deter individuals who are associated to violent crime from being in Surrey.”

So does that mean Randy Jones isn't allowed in Shakerz any more? That would be poetic justice. When is he getting extradited anyways? The Hells Angels sold cocaine out of the Dell Hotel

Does that mean the Cub pack isn't allowed in Panchos any more?