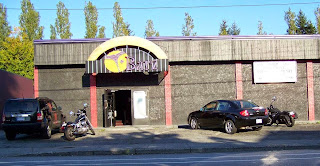 News chaser reported that Two men stabbed multiple times last night inside Shakerz Show Lounge in #Surrey, no word on motive. CTV reported it was outside the strip bar. Global reported that it was near the bar. BC Daily buzz has a video clip. Gee I wonder who let them past the metal detectors with knives. This is Tbarz where they had Dru's memorial.

Tbarz changed it's name to Shakerz last year after it was named as the hub of a Hells Angels cross border drug trafficking operation in a US Indictment. It's owned by White rock Hells Angel Randy Jones. Randy's brother Trevor is still waiting to be extradited on those charges. They put a sign up that said under new management and I said Bullsh*t. Then they had a couple Harleys out front during the renovations when it was "Under new Management." The only thing new about the management is that now it's run by the Surrey Hells Angels not the White Rock Hells Angels since Randy Jones was sent in to baby sit the other Surrey girl rejects.

Randy Jones hid his ownership of it since day one. He had it registered in his mother's name but he had the domain name registered in his own name. He changed that to his mother's name too after I posted it on the blog. Changing the name to Shakerz is to prevent it being seized in the US indictment and to prevent the Liquor board from taking away their liquor license.

Trevor didn't own it, Randy did. Just ask Russel Peters. Russel Peters was giving a plug for Tbarz and said his buddy owns it. He was referring to Randy not Trevor. Randy had the Dank domain registered in Trevor's name but used his e-mail. Let's give it up for the Walrus. 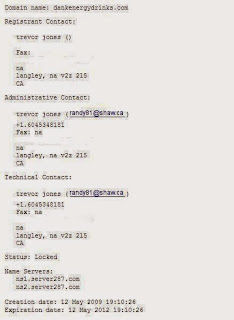