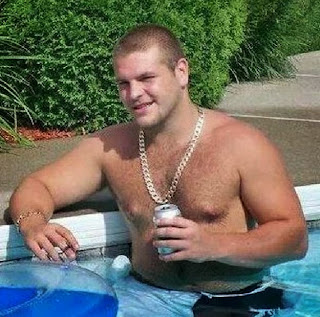 Does anyone with a brain not see something wrong with this picture? Some wannabe gang banger in a pool wearing a gaudy gold chain holding a beer and a cigarette. He just doesn't look like a religious extremist. Yesterday the Vancouver Province ran an article it got off the wire claiming a 15-yearold boy, who reportedly had Facebook contact with the Montreal man who ran down a Canadian soldier in October, robbed a convenience store at knifepoint and allegedly planned to use the stolen money to leave the country and join in terrorist activities. It doesn't get any more ridiculous then that. They also ran a picture of Martin Couture-Rouleau, the guy the kid had facebook contact with accused of running down a Canadian solder in Montreal with his car. 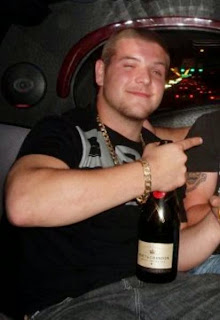 He just doesn't have that religiuos extreemist look about him for some reason. The question is who recruited him? Bill Tieleman reported that “James Cromitie, a low-level ex-drug dealer who converted to Islam. A well-paid FBI informant befriended the Walmart worker and promised him $250,000 and a new BMW car to fire Stinger surface-to-air missiles at U.S. military planes and plant bombs at Jewish targets in New York.”

If the FBI told a "former" drug dealer they would give him $250,000 and a new BMW car to fire missiles at US military planes and plant bombs at Jewish sites in New York, just who converted him to Islam in the first place? Was it their own handler that paid him to plant bombs at Jewish sites and fire missiles at US military planes?

Posted by Dennis Watson at 9:57 AM