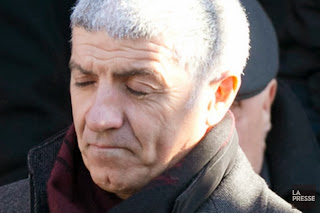 The Montreal Gazette is reporting that Tonino Callocchia, 53, was shot dead in a Montreal restaurant Monday. The Vancouver Province had conflicting reports as to whether he was still with the Rizzutos or part of the Rizzuto rebellion. Tonino survived a previous attempt on his life February 2013. May of 2013 he was charged with extortion and uttering threats to a woman who was close to Raynald Desjardins. If I'm not mistaken, Raynald Desjardins was part of the Rizzuto rebellion.

The Montreal Gazette confirmed the conflicting reports of Tonino's percieved loyalty: "Some saw Callocchia as a Rizzuto loyalist and even a possible successor to Vito Rizzuto — who died of natural causes in December 2013. His involvement in a case of extortion against a woman with ties to Raynald Desjardins, a gangster named in Italian court as the leader of the rebellious faction, furthered that view."

"Others saw his closeness to Calabrian dissidents unfriendly toward the Sicilian-born Rizzuto as well as to Joseph Di Maulo, an influential Mafia boss killed in 2012, likely for not remaining loyal to Rizzuto, as a sign he, too, had strayed." However, his connection to the brother of Joseph Di Maulo was back in 1994. Before the Hamilton Calabrians started knocking off Rizzutos when Vito was in prison. Tonino Callocchia was linked by marriage to the Armeni clan of drug traffickers.

Wiretaps in Italy imply he was shot in February for being disloyal to Vito.