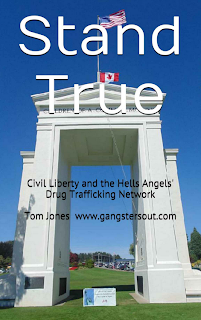 Today is the 10th anniversary of Gary Webb's murder. Today is the day I launch my eBook Stand True: Civil Liberty and the Hells Angels Drug Trafficking Network. It ties my work exposing the Hells Angels’ involvement in the Vancouver Gang War in with the Gary Webb story.

It reveals some of my own personal history with regards to what I did in New York City and South Seattle and why I have beef with crack dealers and those who profit from the sale of crack. I was never a cop, narc or police agent. I was never a gang member or associate either. I was something else. It even reveals some of the bizarre stunts I pulled that resulted in me getting fired from Canada Post for insubordination when Moya Greene tried to privatize Canada Post. I took one for the team and am much better off as a result. Free at last.

Most importantly it dives into the Ricky Ciarniello and the Devil’s Butler story as recorded in Simma Holt’s book which covered extensive wire tap and court submissions involving the Vancouver Satan’s Angels who patched over and became the Vancouver Hells Angels. It’s a deranged history alight that has repeated itself on the Pickton Farm. Yeah I went there too. Here it is. This is my beef. Misconceptions is a free introduction and overview to the eBook.

Update: People are telling me the one click buy option doesn't work. People have also asked if they can get it on itunes. I don't think so. You have to open up your browser on your iphone and buy it on Kindle. The Kindle app for your iphone is free.