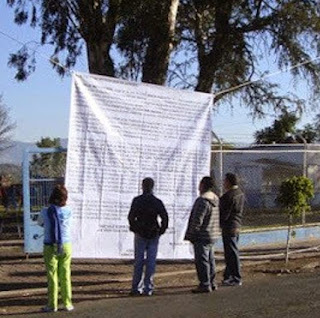 The Independent in the UK is reporting that "A Mexican priest has been found dead in drug cartel-dominated southern Guerrero, marking the latest in series of abductions and attacks against Roman Catholic clerics in the area. Reverend Gregorio Lopez Gorostieta died of a gunshot wound to the head. He is the ninth Catholic priest to have been killed in Mexico over the last two years."

Why would a Mexican cartel murder a Catholic Priest? Sure it's possible but it just seems so unlikely I think it's time to look for other suspects. Right before the Pope came to visit Mexico, the Knight's Templar cartel put up banners calling for a truce and seize fire to gang violence during the Pope's visit. Executing a priest seems so out of character for them.

One thing we do know is that all reports claim that the Knights Templar cartel took over for the cartel La Familia which has been disbanded but all of a sudden mysteriously showed up in Edmonton after they were disbanded in Mexico. So once again, as soon as the Knight's Templar cartel gets wiped out, someone murders a preist in their name. It doesn't make sense to me.

The Borderland Beat appears to have the most up to date information on the cartels in Mexico. They are confirming that many priests in Mexico have been threatened and extorted. Do they not fear God? Pride cometh before the fall and great shall be the fall thereof. They shall become ashes under the soles of their enemies' feet. Watch and see.