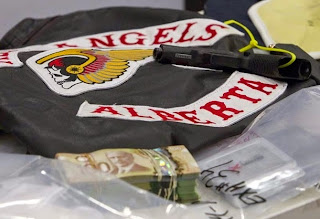 Brent Koziak is a full patch Red Deer Nomad who patched over from the Bandidos in 2004. I am told he is personally responsible for an ever larger network than Dom Jr and that Blake Christie worked for him. Koziak patched in Christie a couple years ago. I am told that Robin Flynn Chelmick is also supplied by Brent Koziak. Blake Christie and Robin Chelmick have both been charged with cocaine trafficking. Now Blake is dead.

February 2014 Global reported that Blake Christie was arrested along with nine other Hells Angels associates for possession of drugs and firearms. Only 350 grams of cocaine and some oxycodone pills were seized but it shows he was involved with a cocaine trafficking network.

A 2011 court transcript cited police wire taps were Robin Flynn Chelmick was acting as the middle man for drug transactions. Evidently the buyer was unhappy with the quality of the cocaine and wanted his money back.

April 2011 the Toronto Sun reported that Robin Flynn Chelmick was charged along with four associates and a prison guard for drug trafficking in the Edmonton Remand Centre. Chelmick survived a shooting on June 10, 2008 and was charged with conspiracy to commit murder in 2009.