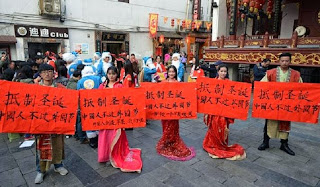 MSN News is reporting that on Wednesday, university students in the central province of Hunan held an anti-Christmas pageant with banners declaring “Chinese should not celebrate foreign festivals.” This after a year long crack down on churches in the Zhejiang Province.

The whole thing is absurd. It's like saying we in the West shouldn't celebrate the Chinese New Year. Why on earth not? Chinatown is the heartbeat of Vancouver. The Lunar New Year is a great festival. In Vancouver a Scottish guy who married an Asian woman join their two cultural traditions in what they call Gung Haggis Fat Choy. Diversity makes us strong.

On top of that, look at how many Christmas decorations we buy in the West that are made in Communist China. Everything from Santas to Nativity sets. A Communist country making religious ornaments to sell but banning their own people from having them. It is somewhat of a contradiction.