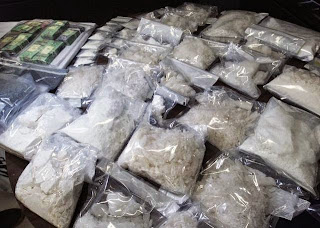 The Winnipeg Free Press is reporting that police raids in Manitoba seized six kilos of cocaine and eight kilos of crystal meth part of Project Distress. The project was "targeting high-level crime, not street-level." Fourteen people are charged with a variety of offences associated with drug trafficking, proceeds of crime and weapons offences.

CTV is reporting that Christopher Houston has since turned himself in and Sean Demchuk was arrested December 19.

"Demchuk has been described in the past as a Hells Angels associate and member of the Zig Zag (Crew) street gang that works for the Angels." In 2010, Dale Donavon and Sean Wolfe from the Winnipeg Hells Angels were busted for supplying cocaine to the Zig Zag crew who were selling the drugs for them and paying them protection money. Famous Amos was caught on video cutting crack cocaine for the Hells Angels in Winnipeg.

They all posed for a family photo in prison showing their continued support of crack dealers. Om 2012 Project Flatlined busted another cocaine ring in Winnipeg along with Dale Sweeney, the subsequent president of the Winnipeg Hells Angles and his brother Rod, a full-patch member.

The Winnipeg Free Press is also reporting that Santa's helpers also busted the B Side gang in time for Christmas. They were also trafficking cocaine in Winnipeg.