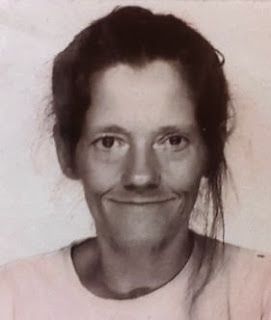 Today is the second anniversary of Janice Shore's brutal assault that caved her head in and put her into a coma from which she never recovered. She died in hospital two months later. The Surrey Leader reported that she was found in the Dead Zone near the drug related violence outside the Front Room. They had a source that claimed she was murdered for a drug debt. It couldn't have been a large debt because she was a user not a dealer.

Last year I ran a series called the Surrey Winterfest highlighting Janice's brutal murder trying to find out who was responsible. I have since found out that the tree she was found beside was where the drug dealers outside the Front Room demand free service from the sex trade workers they sell drugs to. That's when I found out about Larry Mizen, the brutal drug debt enforcer in Whalley that had a long history of violence.

For one of his assault with a weapon, robbery, extortion, unlawful confinement charges in 2006 Colleen Golding was his co accused. When I was looking for the site of Janice Shore's murder to put up a memorial, I asked several homeless people if they knew where the site was. One sex trade worker said she knew and walked me over to it. It was somewhat awkward but you could tell she wasn't from Surrey. The whole time a fat ugly white girl was all in her grill asking where ya going? She just responded to get a life.

After showing me the site, that fat ugly white girl was all in her grill asking her questions as if to say was that a trick? Did you get any money? Ready to pounce on what ever money she had made. This is what I mean about the predatory nature of the drug dealers outside the front room. The drug dealers are the pimps. They take everything. They give them crack for free then take all their money when they come back from a trick. I described the fat white girl to someone who used to work in that industry and she said that sounds like Colleen.

Here's my new appeal. If Larry Mizen really was the one who killed Janice Shore and if Colleen was in fact Larry Mizen's co accused, then now that Larry's dead, she has no protection. The Big Red Machine terminated Larry's contract. They don't want the bad press. If you know anything about Janice Shore's murder, now is the time to speak up. Don't kill Colleen. We need a trial to find out for sure what really happened.

If you know anything about Janice Shore’s murder contact IHIT at 1 - 877 - 551 - 4448 or contact me. We need to deal with this. We need to prevent it from happening again and we need to stop the predators giving the homeless free drugs then beating the life out of them for payment.