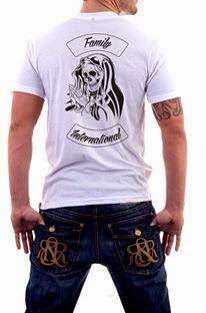 CBC is reporting that alleged members of the Mexican La Familia drug cartel were arrested in Edmonton. I am somewhat skeptical. They have over a dozen white guys on their facebook page modeling support gear for La Familia International. Sounds like a new name for another HA puppet club to me. Hopefully the police will release some names at their press conference tomorrow. It is somewhat ironic they could support the Whiteboy Posse the same time they support La Familia. One are neo Nazis the other are not. I'm told they're recruiting Natives in Edmonton. Time will tell with regards to their standing with the local groups. 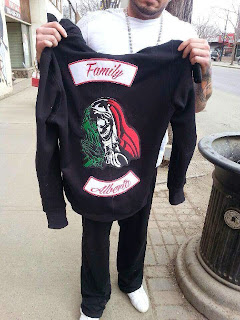 Update: Global is reporting that La Familia’s Alberta president, Jose Antonio Monterrey, was arrested Dec. 11 while trying to board a flight at the Edmonton International Airport. His three alleged associates, arrested in Edmonton, are Peter Alan Griffon, 34, Cody Sterling Tremblett, 28, and Penny Sue Fleming, 34. The Police are reporting that 5 kilos of cocaine and two kilos of MDMA were seized in the bust as well as a few guns with lots of amo. Police claim they supplied drugs to Edmonton, Fort McMurray, Drayton Valley, Lloydminster, and Red Deer. Those are all Hells Angels areas. So are they working for the HA or did the police just clean house for the HAs?

I don't want to sound too cynical but... I just find this so hard to believe. Edmonton? There's not a large Latino population out there. MS 13 is definitely hard core but they are El Salvadorian. They don't even have a large base in Vancouver which is much more multi cultural. I can't help but wonder if this Edmonton group was started by CSIS. After all CSIS created the Heritage Front to monitor right wing extremists. The Winnipeg Rock Machine had a police agent as a senior member. It's all just a little bit weird.

"September 2009 and recommended the development of a national strategy to combat street gangs in Canada. Criminal Intelligence Service Canada’s role in this strategy is intended to strengthen the network of analysts and intelligence officers who collect and share criminal intelligence specifically relating to street gangs across Canada. The objective would be to identify best practices, support street gang experts and produce intelligence products that focus on the threat and risk levels of particular street gangs and identify new trends."