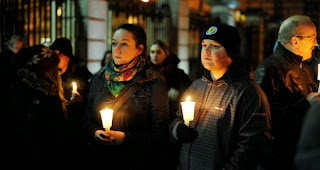 Christmas is a time we often think of the homeless and people who suffer. The ceremony to turn on the Christmas tree in Dublin earlier this month was postponed as a mark of respect to the homeless man who died in a doorway just yards away. Greed and homelessness are still very real concerns in our heartless world. Our situation here is compounded by the predatory drug dealers that exploit the homeless by giving them crack then beating the life out of them for payment. That kind of greed surpasses that of the heartless billionaires who turn a blind eye. That kind of cold hearted exploitation is predatory.

Yet this Christmas I want to remember a different kind of sorrow. The sorrow of lost loved ones. Freddy asked if I was going to make my usual Christmas post this year. Previously I have gone off on various Christmas Epiphanies and messages that directly or indirectly relate to the gang war. This year I just didn't have it in me. So much has been happening behind the scenes I just lost heart. There's a time for all thing. A time to laugh, a time to cry, a time for war and a time for peace. Grieving is a normal and healthy part of the healing process.

Christmas is a very emotional time of year. It can be magical especially for the young filled with anxious anticipation. It can also be very stressful. Especially at the mall. Many are reminded of bad family experiences and commit suicide which compounds the tragedy at Christmas. This Christmas there have been several families that have lost loved ones. A young skateboarder in Whiterock was savagely and senselessly beaten to death walking past a park where youth had been drinking at and a seven year old girl tragically fell to her death on a hike with her family up Unnecessary mountain when a rock gave way due to the recent rain.

Christmas compounds the sorrow of that loss. This Christmas a friend of the family has a son who will be putting the ashes of their dead 9 month old baby under the tree who died in an accident that is enough to cut any man's heart out. You can't celebrate in times like that. Grieving is appropriate. The only thing I can say is be thankful that person came into your life because life does not end at death. You will see them again but not yet. Be thankful you had a good relationship. Abuse is rampant. Living in an eternal family filled with abuse would be an eternal hell indeed.

Solomon once said it is better to dwell in the wilderness than with an angry and contentious woman. I can passionately testify that statement is true but it goes both ways. There are just as many crazed men out there as there are women. Experiencing the torment of a stalker is not a pleasant thing. In cases like that it is far better to be single then be in a bad relationship so if you're depressed about being single like many are, then be of good cheer. It could be worse. Ever see the movie fatal attraction? That show scared the life out of me. The guy has a heated affair with a hot woman who turned out to be a raging lunatic. The affair most certainly was not worth it.

Yesterday at work I was in the lunchroom with a couple of like minded sarcastic men when the newscaster said something about next year being a better year. One guy turned to the other and sarcastically said could it get any worse? To which I replied, ah yeah it could. We could get that earthquake everyone keeps talking about. He laughed and said see, there's another optimist. I joked and said it could always get worse. That's the scary part.

This Christmas I'd like to remember all those who have lost loved ones and are grieving that loss. I'd encourage you to light a candle in their memory and look forward to the time when you will one day see them again. Live the life that would make them proud. Peace. 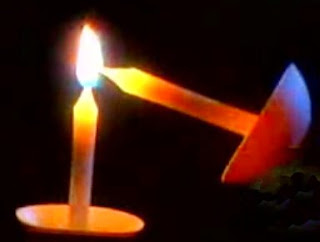