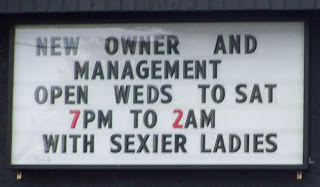 So the other day I happen to be driving by and sure enough, they have a sign out front claiming it has a new owner and is under new management with sexier ladies. So does that mean CJ Barrowby, the guy who got house arrest for selling cocaine for the Hells Angels, won’t be supplying Tbarz with the strippers anymore or is that just more BS since the Hells Angels control most of the stripper agencies in BC now.

Monday I drive by and they had the door open when they were closed. It looked like they were doing renovations with a Harley parked out front. Yesterday, the same thing only this time two Harleys parked out front. So when they saw new management does that mean a new chapter of the Hells Angels or the same chapter with new puppets? I sure am curious how Tbarz ties in with that huge cross border drug trafficking ring in the States. Sounds like the same people are still involved.

Perhaps the Seattle court should subpoena Randy’s pal comedian Russell Peters. Russell said his friend was the owner of Tbarz and that he loved the place calling it the nude world order. I’m pretty sure Russell was referring to Randy, not Trevor, his mother or some other Asian business agent they had on the city application. After all, Randy is the Walrus so he is. Coo coo ca chew.

Randy Jones, as we know, is a full patch member of the Whiterock Hells Angels. Both he and his brother Trevor were implicated in that huge cross border drug trafficking ring. The US indictment referred to Tbarz as the hub of that drug trafficking organization. So when they say new management, do they just mean the new Surrey chapter of the Hells Angels? Please advise because the Hells Angels are not welcome in Surrey. 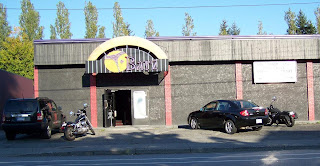 Hey, speaking of Randy Jones and the Village People, what on earth happened to the Dell and the Blue corvette? I thought it was a stroke of marketing genius for the Hells Angels to turn the Dell into a Gay bar called the Blue Corvette. All those crack heads would head for the hills and clean up the neighborhood nicely. Now I see the Blue Corvette and the Oasis, is totally demolished. What are they building there now?