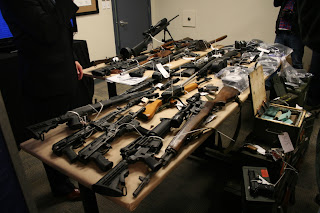 Riley Stewart Kotz from Vernon has been charged in a gun trafficking operation that involved 80 firearms, over-capacity magazines and thousands of rounds of ammunition. Some of the weapons seized included the Tech 9 and a number of AK-type assault rifles. CFSEU executed search warrants over the weekend in Penticton, Vernon and Summerland. Four Canadian men and one American woman are facing numerous gun charges. We know that Vernon was where the Vernon Greeks ran the drug trade and had Hells Angels support gear on their possession.