Surrey Mayor wants a toll on everything 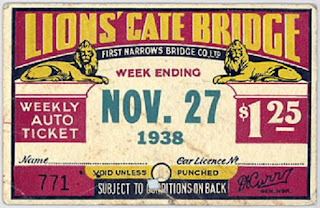 Why does this not surprise me? Surrey Mayor Dianne Watts says heavy tolls on the Port Mann and Golden Ears bridges are unfair and claims that we need a system that’s fair and equitable. Her solution? Toll everything. Why does this not surprise me? Here’s the person who came out in support of the gas tax now wanting a free for all tax on everything to fund their ever growing expense budget. Seems like she’s adapted a George Bush spending policy since their economic summit. Scary how similar Dianne Watts and Christy Clark are on so many issues.

One North Shore resident wrote in to the Vancouver Province and said: Surrey Mayor Dianne Watts should stick to spending her own residents' money and stop trying to sell more tolls in other areas. They’re absolutely right. Lions Gate bridge had a toll back in it’s day. Just like the Coquihalla. I was actually pleasantly surprise to see the toll had be removed from the Coquihalla this summer now that it has been paid for.

Obviously a new Port Mann bridge needed to be built. The original plan was to twin the bridges but Gordon the Glutton Campbell wanted a King Ramses monument to his era of insider insanity and scrapped that plan for one mega bridge that would cost more than twice as much money. Amazing how politicians like to spend other people’s money and pat themselves on the back as they do so.

I will point out that not only did they fail to make the extra lane on old the Port Mann bridge a counter flow lane, even though they have opened up half of the west bound traffic on the new bridge, the old bridge still sees cars lined up for miles trying to cross two lanes in the morning while three lanes of the old bridge remain empty. Charging anyone a toll for lining up for hours to cross two lanes of traffic in the morning is insane.

Yes the Port Mann needs a modest toll. A smaller toll for a longer period of time would be more prudent. Tolling everything is just another fiscally irresponsible tax grab that should not even be considered. Surrey council needs to get in control of their spending and their expense accounts.

Another insanity is the ever increasing cost and tax burden of Transit. Not having turnstiles like every other city on earth is insane enough. Today on the news it was talking about a red button bus drivers press every time a passenger gets on without paying. They say it was pressed over a million times. Are you kidding me? Fair evasion on Sky Train where there are no turnstiles is bad enough but on a bus where a driver let’s them walk right past? This is insane. Once again we see tax payers subsidizing criminal activity.

Posted by Dennis Watson at 2:17 AM