Joanna Lee Larson from the Surrey House of Horrors was found guilty in 2005 of murdering Annette Allan back in 2001. Joanna was sentenced to 18 years in prison in 2005. August 2011 the Vancouver Province ran an article about how Joanna the murderess had changed and was out on day parole. Today, they changed their tune and found out they’d been had as her parole has been revoked for parole violations.

This month a federal parole board revoked Larson’s day parole, saying she has been caught in the exact pattern of behaviours that led to the bloody murder of 27-year-old Annette Allan, including drinking, associating with drug users, and repeatedly threatening to violently assault another woman. Joanna was one deranged player from the House of Horrors but she wasn’t the only one.

November 2011 Steven Patrick Lyoupe was convicted of manslaughter in the murder of Garry Glen Harder in 2006. William Thomas Walker, 40, of Langley, and Jordon Vojkovic, 26, of Calgary were co accused charged with first degree murder of Gary Harder. All three beat the life out of Gary including hitting him in the head with a board with nails in it. Handcuffing him to a chair and electrocuted him by putting live wires in his ears.

Sex trade worker Yvonne Boen's DNA was found at the Surrey House of Horrors as well as on the Pickton farm. Last summer we heard testimony from a nurse who was forbidden to speak at the not so public inquiry claiming a drug addict she knew claimed she went to a well known Hells Angels spot in Surrey called the House of Pain. We know it as the house of horrors. The woman told the nurse she was taken from there to a party on the Pickton Farm where there was a lot of drugs. She got a bad feeling and ran for her life. As a result, she lived to tell the tale.

Let’s not forget a Hells Angel drug dealer named Tony Terezakis who filmed himself beating the life out drug addicts who owned him money in East Vancouver and couldn’t contain the laughter when they played the videos in court.

We see a very disturbing pattern repeat itself. Torture of drug addicts for drug debts. Forcing women into a life of prostitution for drug debts and a deranged world of mistreatment of those drug addicted sex trade workers that connect the Hells Angels to crack houses in Surrey and the Pickton farm. Wally Opal should be in jail for accessory to murder. 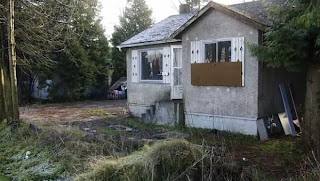