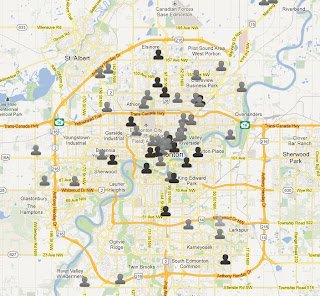 Speaking of gory dismemberments, Wednesday morning a human head was discovered in an Edmonton alley near 72 Street and 131A Avenue. Residents in the area claim it isn’t a safe neighbourhood. Police believe the human head is linked to a homicide Saturday night where a dead body was found in a ditch on Range Road 121 northeast of Ranfurly.

By Tuesday the medical examiner’s report was completed and the suspicious death was ruled a homicide. Decapitated body lying in a ditch. Ya that’s suspicious alright. However, they didn’t release at the time the body was decapitated. Still with holding information. One step forward, three steps back.

Let’s not forget that last year Deadmonton had the most murders per capita than anywhere else in Canada. Contrary to rageful denial of spin doctors on site, many of those murders are in fact drug related. This is an interesting interactive map. If you just select 2011 and shootings you will see that there were many shootings in Edmonton in 2010 and 2011. The most common types of homicides during that time period were shootings, stabbings and assaults. 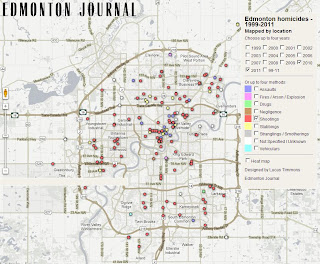 Notwithsatanding the rapid increase of drug related violence, we need to address the issue of the new deranged trend of torture, decapitation and dismemberment. That is not something to be admired or respected. That is the sign of mental illness. It makes a statement alright. It screams these guys need professional help. They need some serious time with Doctor Phil because they are really messed up. Wearing a support shirt now is like wearing an I support Clifford Olsen, Robert Pickton or Charles Manson shirt. Just because something has become common does not make it normal or acceptable.