Wasn’t it Susan Powter who once said: Stop the Insanity. It’s about time we did. Stephen Harper is still actually considering letting Communist China buy our Canadian oil rights. He just extended the deadline a month. This is insane.

Ever heard of Vietnam? Ever heard of the Korean war? What if Communist China decides to invade another country like Tibet and bring them into bondage? Are we going to supply their tanks fuel to invade other countries? Once we give them our oil rights, we will have to. There was a reason we sent troops to Korea and Vietnam. 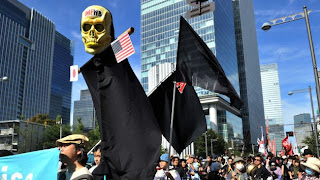 As we speak, China is holding anti American demonstrations. They want to invade an island Japan had before their surrender to the US in the war because it has oil. If Iran did that we would be talking about bombs not giving them control of our oil. As we speak, China recently boycotted a meeting of the International Monetary Fund in Japan to defy Western economic rules. Giving a Communist dictatorship economic power to put sanctions on the free world is insanity at best.

Of the two options, letting the Texans have control of our oil would be a million times better than Communist China. Yet there is a third option. Canada can remain a free and sovereign nation and control it’s own oil. Imagine that.

We can sell oil to China but to give them control of our oil rights is a completely different matter. There are a lot of people in Vancouver of Chinese ancestry. Many of them are here because they disagree with Communism. The Epoch Times is a local and international paper that regularly speaks out against the murder and atrocities committed by Communist China.

As we speak, local officials in the Chinese Communist Party have violently and forcefully evicted people from their homes and property before seizing them in an attempt to make up for local budget shortfalls, according to a report from Amnesty International.

The Epoch Times is reporting that the Chinese state-owned oil company looking to close a record-setting takeover of Calgary-based Nexen is one of China’s most abusive employers, directing its security forces to arrest and imprison Falun Gong adherents. Did you catch that? The company has it’s own security forces that are arresting employees for their freedom of association.

It is highly ironic that the “left wing socialist” NDP cares more about human rights violations in Communist China that Stephen Harper does. If this deal goes through, Stephen Harper will be remembered as the worst Prime Minister in Canadian history. He will be a traitor to the free world.