Ken and Greg Brotherston: the family that murders together… 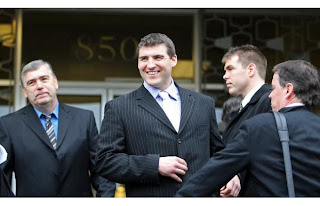 Police say 57-year-old Rick Green followed a couple who had been fighting into the parking lot of the Country Rose pub a week ago. Encouraging the woman to go back inside, witnesses say he told the man to “get in his car and leave.” That’s when Gregory Brotherston, the man arguing with his girlfriend, assaulted the 57 year old man who has died of his injuries.

It is claimed that Gregory Brotherston hit the 57 year old man once with an open hand and the man then "fell and hit his head". I’m sorry but that does not pass the test of believability. Who said that anyways? We know it wasn’t the victim because he was in a coma and has since died. The girlfriend who the dirt bag was arguing with and is no doubt afraid for her safety? I'm sorry but that is not credible testimony.

What is credible is Gregory Brotherston’s past history. May 2008, Greg’s father Kenneth Brotherston Sr. roared up to the West Shore RCMP detachment with a dead body in the back of his four-by-four pickup truck.

Court heard that an agitated Brotherston told a dispatcher he'd had an altercation with a guy with a gun, and put him in the pickup because he'd beaten him. Officers recognized the still-warm body of Taylor, who'd been in and out of trouble and had been released from jail three days earlier. Taylor had been choked to death, his neck broken in three places.

Brotherston was taken into custody. Two days later, his sons, Ken Jr. and Greg, turned themselves in to police. Initially, all three were charged with the first-degree murder of Taylor. At the end of a preliminary inquiry, all three were committed to stand trial for second-degree murder. After hearing the trial, Dillon determined that Brotherston was acting in self-defence and that his sons had merely been protecting their father. According to who? The father and two sons accused of committing the murder? Unfortunately the victim wasn’t able to testify because he was dead.

Yet his body was covered with multiple superficial blunt-force injuries, his body contained drag marks, there were huge cuts on his face, his nose was broken and he had head injuries. "There is no doubt he suffered a tremendous amount of punishment."

The court heard neighbor Ayla Hagreen's call to 911. "Someone's really hurt," she said, telling the dispatcher she heard men fighting, women screaming, things breaking and someone yelling, "leave him, leave him." Three on one, beating the life out of the guy is not self defense. Someone dying because they hit their head after they were hit once with an open hand is not believable.

The question that needs to be asked is what was Ken Sr. doing in a drug house anyways? The court heard that his sons were heavily addicted to drugs and that their victim was a dealer. One source claims the person he murdered was harassing them for money they owed him. The father testified the person he murdered wanted money from them. For what? For the drugs he sold them? Why that’s a nice upstanding family. So tell me, is Greg Brotherston still heavily addicted to drugs? Please advise. The familty that murders together stays [in Hell] together.

Update: The Victoria Times Colonist is reporting that Greg Brotherston has been charged in connection with a home invasion at a Langford mobile home park on Oct. 6. Yesterday he was charged with Break and enter, assault with a weapon,uttering threats and robbery of William Corlett age 78. Brotherston's lawyer claims his client adamantly denies the attack despite the fact that the victim states he recognized his client as a man he had met a week or two earlier.

At the mobile home park on Wednesday, Corlett said he was awakened about 5 a.m. by a man who held a knife to his throat and demanded money. "He had my wallet and there was no money in it. He wanted the PIN numbers for my debit cards."Corlett said his attacker hit him several times. Corlett, who rides a scooter and requires homecare health services, said he recognized his assailant as a man he had met about a week or two earlier. The RCMP have confirmed the charges against Greg Brotherston. The question that needs to be asked is has Greg Brotherston over come his serious drug addiction? Yes or no.