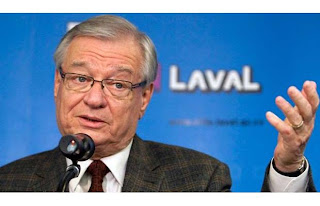 As the Montreal corruption trial continues, police raided the mayor of Laval’s home and office looking for evidence about city corruption accepting kickbacks from the mob in the construction industry. Laval has some past history. The Laval chapter of the Hells Angels were executed by their own people in what was referred to as the Lennoxville Massacre.

Laval is the site of the murder, betrayal and take over of the Death Riders that earned Mom Boucher and Biff Hammel their colours. Now Gilles Vaillancourt, who has been mayor of Laval since 1989 is under investigation.

This is starting to look a lot like the police raid on the BC Legislature. The whole scandal seems to revolve around the accusation that city hall officials were getting kickbacks from the mafia for awarding construction contracts.

Now when they say the “mob” that is pretty ambiguous. Which mob? That’s like saying a criminal organization. Which criminal organization? We know that there was a huge amount of press about the Hells Angels control of the construction industry in Montreal. That’s what sent Marvin put your shirt back on Ouimet into hiding. As well as his connection to 22 murders of course. Police believe he infiltrated Quebec's lucrative construction industry and was controlling several building firms used to launder money. It also involved a controversial renovation on Parliament Hill.