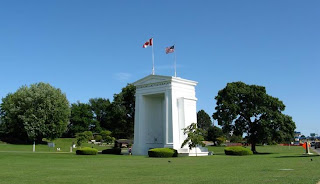 A Canadian Border Services Agent has been shot today at the Douglas Border Crossing in Surrey. Evidently that border crossing has been closed and traffic is being diverted to the Truck border, Aldergrove or Sumas crossings. Witnesses heard two shots fired around 2:00 PM. Police are stating the suspect has a self inflicted gunshot wound. The CBSA officer was on duty at the Peace Arch border crossing in Surrey when the officer was believed to have been shot by a male suspect who then killed himself. Here's a link to the border web cam to see when it reopens. Kim Bolan ir reporting that is was a female border agent who was shot in the neck by a man reportedly driving a vehicle with Washington plates.

Update: Police have identified the shooter to be 32 year old Andrew Michael Crews. Crews was a tattoo artist who worked at a parlour in Silverdale, Wash., west of Seattle. He grew up in Las Vegas and recently moved to the area, his co-workers and friends told CTV British Columbia. Lori Bowcock, the Canadian border agent shot in the neck is expected to make a full recovery.

I can’t believe Canadian border agents aren’t armed yet. That is astounding. With all the drugs and gangs crossing the border, not arming the border guards is insane. How are they supposed to defend our border? There’s a plan in place to train and arm the border guards but it still hasn’t happened yet. Astounding.