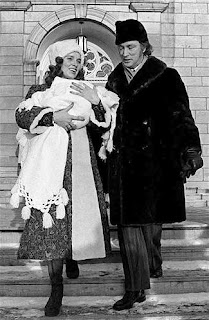 Here we have it folks. This picture is proof that Justin Trudeau’s father was a Communist. Just look at his furry hat and furry coat. Why that’s the same type of hat and coat they wear in mother Russia. Wait a minute, the picture was taken during winter in Montreal. It was freaking cold out. He must be a smart Communist. It looks rather warm and he looks rather comfortable in the cold.

The picture was also taken outside a church right after Justin’s parents had him christened. I thought Communists weren’t allowed to go to Church and have their kids christened. That’s strange. Maybe he’s not a very good Communist.

When we think of Communism, what’s our biggest fear? Well the first thing a Communist regime does is remove free speech and lawful assembly. They destroy the freedom of press. Then they create a police state when the police can search you without cause, arrest you without charge and deny you a lawyer as they hold you in prison indefinitely. That’s the first thing a Communist regime does.

So if that’s what a Communist regime does, then why did Justin’s father prevent any of that from legally happening by creating the Charter of Rights? The Charter of Rights claims we have the freedom of speech, the freedom of the press and the right to lawful assembly. Removing those rights are in fact illegal. The government is bound by that law. So why would a Communist do that? Create a law preventing Communism from taking over?

Why would a Communist create a law that would prevent the police from being able to search people without a reason or arrest people without a charge? Why would he make a law giving people the right to a lawyer when they are arrested if they want to create a Stalin style death camp? Maybe it’s because Justin’s father wasn’t a Communist at all. In contrast, everything on that list is exactly what Stephen Harper is trying to do us. Isn’t that ironic?

Years ago I wrote a satire about how George Bush declared war on Santa and threatened to bomb the North Pole because his intelligence told him Santa was a Communist. After all, he wore red. He looks a lot like Carl Marx. He even gives away free gifts supporting the welfare state ideal of something for nothing. The purpose of the satire was to show us how silly some of our stereotypes can really be.

When people wear a Che Guevara T-shirt, they aren’t saying we want death camps and we want to create a police state to destroy the freedom of speech. They are saying they support this romantic idea of social justice that unfortunately didn’t happen under Lenin, Stalin, Chairman Mao or in East Berlin. What happened there was the exact opposite. Why is that? Because the manifesto doesn’t protect individual rights. It doesn’t even protect collective rights.

I submit that the only way that dream of social justice can exist is in a free republic where individual rights and freedoms are guaranteed by a Charter or Constitution which binds the government. All governments need to be bridled so they remain accountable to the people.

So Justin Trudeau makes it official. He has officially announced that he is running for the leadership of the Liberal party of Canada and states that he is in love with Canada. He said Canada “can do better” if its citizens actually see themselves in their government. That’s an interesting thought.

“My friends: I love Montreal. I love Quebec,” Trudeau said. “And I am in love with Canada. “I choose, with all my heart, to serve the country I love.” Wow. Kinda makes me think of Jack Layton’s dying pledge “My friends, love is better than anger. Hope is better than fear. Optimism is better than despair. So let us be loving, hopeful and optimistic. And we’ll change the world.”

That is in complete contrast to Stephen Harper’s message of fear and hate that is removing our individual rights and taking us down a road thirty years ago we never would have considered.

Interesting to note that the media recently released some partially declassified statements about how the CIA didn’t like Pierre Elliot Trudeau but loved Lyin Brian Mulroney. It’s enough to make you heave. It’s pretty clear why they liked Lyin Brian and felt he would support their efforts in Central America. Al Martin claims Lyin Brian was involved with Trans World Arms the Canadian Arms company that was used by the CIA as a shell company to smuggle arms into Nicaragua which was paid for in cocaine.

Since every word that came out of Brian Mulroney’s mouth was a lie, it’s no wonder Al Martin thinks he was so involved with the CIA’s arms dealing and drug trafficking in Central America. He’s still a BOD member of Barrack gold which was created by a shady arms dealer.

In contrast Justin Trudeau is a beacon of hope. His love for Canada is something sincere Canadians can relate to. We remember a time when we were proud to be Canadian. That was before we started torturing prisoners and calling everyone who expresses their opinion a domestic terrorist. I look forward to hearing more of what Justin Trudeau has to say. I will say this, our condolences for the loss of his brother Michel in a BC Avalanche. That was indeed tragic. 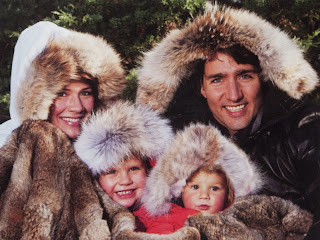