The tragic story of Omar Khadr 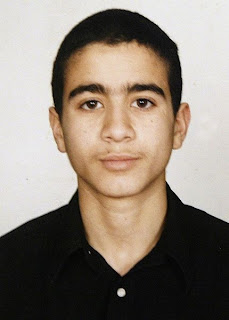 This is the sad story of a Canadian teenager who grew up in Guantanamo bay. You know Guantanamo. That’s the CIA black prison site where they torture prisoners without a charge or trial and hold them indefinitely. That’s the place that Obama promised to close but didn’t. It’s a sad tale about what our complacency has turned us into.

Instead, the 15 year old kid grew up in Guantanamo Bay. After 8 years in Guantanamo, if that kid doesn’t grown up to be a terrorist, then we know he is a saint and never should have been incarcerated in the first place. His father fought the Soviet invasion of Afghanistan.

After spending 8 years in that God forsaken institution where prisoners are tortured without a trial, he made a plea bargain. If he pleaded guilty to murder then he would receive another 8 year sentence with the possibility of being transferred back to Canada. He signed the plea agreement which makes the confession itself suspect.

So he returns to Canada and his lawyer contends that Harper has vilified his client. Harper claimed Omar was a convicted terrorist that supported Al-Qaeda. Wait a minute. Stephen Harper supported Al-Qaeda when he agreed to violating the no fly zone in Libya and helped Al-Qaeda terrorists overthrow Gadaffi. Should we put Harper in Guantanamo for that?

Nobody likes terrorism. Yet no one likes the invasion of a sovereign nation either. The Globe and Mail claims Omar Khadr ‘s return will test Canada’s commitment to war children. Indeed, the double standard is disturbing. If the Taliban are so bad, why did they stop opium production in Afghanistan and why did we increase it?

I think we as a people are diminished when we let this kind of injustice continue. Recently a blog reader sent me a list of You Know You Are a Conspiracy Theorist If… Sadly we could also use that list to define domestic terrorists. We are going in the wrong direction and we are letting our fear and hate take us there.

Let’s turn back the hands of time and bring it home. What if this happened in 1812 when the Americans weren’t an ally they were an enemy who invaded Canada. Of all the tyrants and terrorists this world has to offer, the United States is the only country thus far that has actually invaded our country. We are seeing heritage commercials about the event on TV since it’s the 200th anniversary. Remembering that event is worth while.

So what if this Canadian born 15 year old was living in Canada in 1812 and had shot an invading American soldier? Would he still be called a terrorist? Would we still support his torture? Would we still say anyone who fires upon an ally deserves to die? The Americans invaded Canada and their navy kicked our ass. In response we marched across the border with some First Nations brothers and burned the White house to the ground. Was that an act of terrorism or an add for a heritage commercial?

The location of Guantanamo Bay

Another thing we need to discuss is the location of Guantanamo Bay. The Guantanamo Bay detention camp is in Cuba of all places. It was turned into a prison camp for torturing prisoners without a trial in 2002 by War criminal George Bush. The one who vetoed the bill to stop torture. Not only were they caught torturing prisoners, George Bush vetoed the bill stopping it. That makes him a war criminal. By vetoing the bill, he assumed legal liability for the torture.

Cuba is not an ally. The prison does not exist with Cuba's permission. Before the prison camp was created in 2002, the US had a naval base on site. This was from Cuban-American Treaty of 1903 where they were permitted to have a coaling (fuelling) station. A naval base is not a fuelling station nor is a prison camp for torturing prisoners. According to the 1903 agreement the US are required to recognize the Republic of Cuba's ultimate sovereignty over the area. They have failed to do this by changing the purpose of the fuelling station against the will of Cuba. This is the invasion and occupation of a sovereign nation.

The Cuban government opposes the presence of the naval base, claiming that the lease is invalid under international law as it was not a sovereign nation at the time. Obviously. There is no longer an agreement between both parties. The United States argues this point is irrelevant because Cuba apparently ratified the lease post-revolution, and with full sovereignty, when it cashed one rent check in accordance with the disputed treaty. That's like saying someone squatted in your house rent free for ten years and you cashed one of their rent cheques. That doesn't mean you agree to them being there. It means they accepted a token payment for all that time you squatted there rent free. It's time for Cuba to raise the rent and evict those evil squatters.