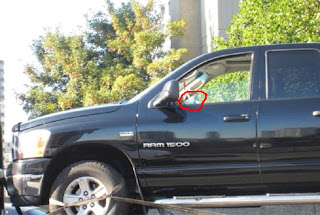 There was a shooting in Vancouver’s West end yesterday at 3:00 PM. A black pick up truck was shot at near Jervis and Comox. A local resident told the Vancouver Province that he heard bang, bang bang and thought kids were throwing firecrackers. The target driving the pick up was not injured and left the scene. Police caught up with him as he was driving across the Burrard Street bridge and seized his vehicle for the investigation.

Reports came in that the truck was riddled with bullets yet only two bullet holes were seen. One dangerously close to the driver in the bottom of the driver side window and another on the rear left quarter panel. The police found shell casings in the alley behind Jervis and Comox. Judging from the photos in the paper, the police had numerous markers on the ground implying several shots were fired.

So although several shots were fired only two shots that we know of actually hit the vehicle and the driver was uninjured. Not like the recent daytime shooting in surrey where the shooter fired several shots from point blank range through the windshield right into the target.

Although the name of the intended target in this case is not being released, police state the shooting was targeted and gang related.