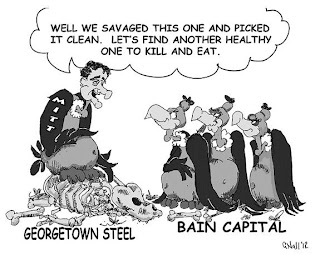 Interesting editorial in the paper yesterday about corporate welfare. Timely as it was published the same time talks about plans for the next round of stimulus was reported. Remember back in the day when corporate welfare was a bad thing? Conservatives would call it communism. Things have sure changed.

I remember one of the signs from the occupy movement saying “We have privatized gains and socialized losses. That is not capitalism.” Back in the day, corporate welfare was a dirty word. The right who had a hate for Trudeau, would call him a Communist for wanting to create a top heavy government that created jobs by employing people. Yet what they’re doing now is far worse. At least he had a desire to create jobs to strengthen the economy. Now the corrupt politicians simply burn tax dollars by handing out money to banks and Wall Street of all places. It is insane. Back in the day, the right would be screaming fiscal irresponsibility.

The editorial talks about business grants that aren’t paid back. One can legitimately argue that offering business grants will help create jobs and thereby improve the economy and the tax pool. My flaming concern is when we hand over billions of dollars to the banks who as we say, didn’t need it and to investors on Wall Street most of whom history has shown are crooked.

The dismantling of the VSE is a prime example. It was full of fake pump and dump stocks. That trend continues on all the markets. Investment fraud was what caused the Greek financial crisis. What was public money all of a sudden became private money, then mysteriously disappeared through investment fraud. Bailing out investment fraud is insane. Doing it on an ongoing basis is simply criminal. It is a misappropriation of tax dollars. It is a scam.

The Mitt Romney Bain Capital model kills jobs and embezzles money from companies while it feeds the banks with insane interest on loaded debt and fills these vultures’ pockets with insane consulting fees. Business consultants who extract millions of dollars in fees from sinking companies before they go bankrupt should be in jail. They should not be getting tax dollars to help them steal. That applies to Mitt Romney at Bain Capital as well as Newt Gingrich at Fannie Mae. They even call it the vulture fund. We should not be aiding and abetting that kind of fraud with tax dollars.