The Roman Wall on Mount Baker

On the brighter side, I hiked up to the Roman Wall on Mount Baker yesterday. It was awesome. Ya know I’ve very Canadian and I’m a Vancouverite all the way, but when you drive from Langley to Abbotsford Mount Baker is staring at you saying here I am, come and get me. Baker is one of the nicest hiking trails in the Pacific Northwest.

When I fist started snowshoeing a few years ago I said to myself I want to snowshoe on Baker. I want to see if I can make it to the glacier. I wanted to see what climbing on glaciers was like. So I head up to Baker and snowshoe up the Ptarmigan Ridge trail. You get a pretty awesome view of Baker up close and personal. Yet between that lookout spot and the glacier is a huge inaccessible gully. I said surely there’s a way to access the glacier.

Turns out the ski hill on Mount Baker, as awesome as it is, isn’t actually on Mount Baker it’s on a few peaks right beside Mount Baker. To get to the glacier on Mount Baker you have to turn at the town of Glacier and drive up Glacier Creek Road. It’s an old single lane logging road that has pull outs on the shoulder were you can pull out on if there’s an oncoming car. 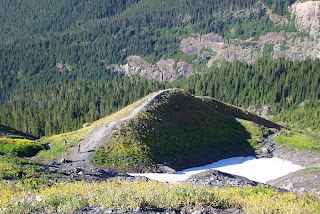 You drive up Glacier Creek road then hike the Heliotrope trail and climb up Hogs Back. Hogs Back is pretty unique and easy to identify. It looks very much like a hog’s back and serves as the base camp for those who are serious about climbing the summit. From the base camp at Hog’s Back it’s about an eight hour return hike to the summit. It’s very deceptive. It really doesn’t look that far from there but it is. You’re just out of the tree line and Baker is huge.

Climbing a glacier in the summer can be dangerous. Part of the glacier is crumpled like an accordion, that’s the Coleman glacier. Other parts of the glacier depending on the time of year are breaking up and have huge crevices you can fall in. In the winter they’re full of snow but in the summer the glacier stats to melt and break up. One year I went the glacier was totally screwed. It was receded way beyond normal and the trail was inaccessible because the normally small crevices were these huge monster crevices that there’s no way you wanted to fall in one. There were like 15 feet wide and went down a very long way.

The last couple times I went the glacier was right to the base camp on Hog’s back and the footpath was clear. You had to step over a few crevices yesterday but they weren’t the huge monster crevices that were everywhere a few years ago. Yesterday the danger was if you slipped and lost your footing in the soft afternoon snow melted by the summer sun. If you slipped and start sliding down the mountain, that’s when you can fall into a large crevice. That’s why you’re supposed to travel in pairs and bring full gear including rope and ice anchors to pull your partner out if they fall in a crevice.

That’s a lot of gear for me to carry. I'm just a day tripper. I’m OK with a day pack carrying all your water and lunch with crampons and an ice axe to stop me in case I slip and start to slide into a crevice but all that gear is just too much for me to carry climbing all that way.

One year I climbed up to a rock formation that looked like Hadrian’s Wall in Scotland. When I got back home and looked on the map it was actually called the Roman Wall. It’s a natural rock formation where the wind has eroded the mountain that forms jagged peaks resembling a wall along the top on the way to the summit. The path to the summit goes right beside it. The rocks on Baker are crumbly slate. They’re not the typical large solid rock you see around the Vancouver mountains. I guess that’s because it’s volcanic. You can also see a fair bit of pumice as well.

I climbed up the glacier to the roman wall yesterday and the glacier looked a bit doggy after that so I turned back. It was nice to get your ice and snow fix at the end of summer. Ya gotta love that. 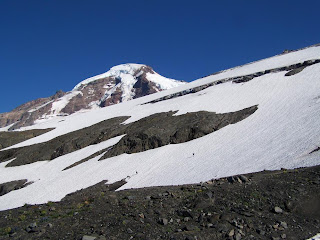 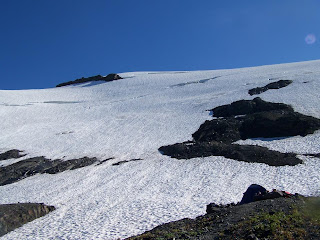 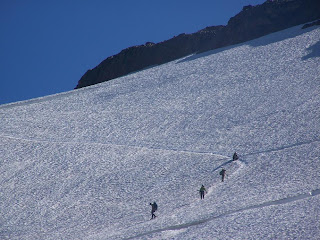 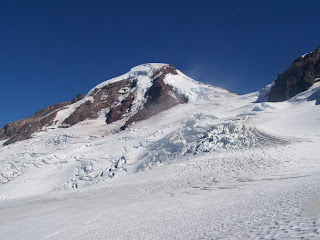 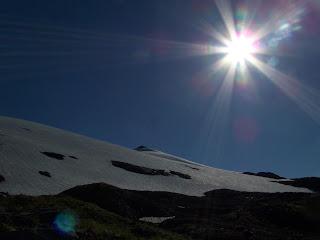 This is one of my favorite pictures I took a few years ago of the sun rising behind Mount Baker. You can see the path on the right along the Roman Wall:

This is as far as I made it that year. The path on the right was totally accessible. I just ran out of steam and had boots that didn’t fit properly: 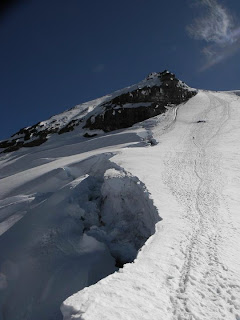 Posted by Dennis Watson at 8:30 AM