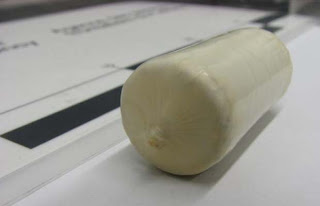 A passenger on a bus from Seattle to Vancouver was caught with cocaine. Turns out he had ingested it and passed 66 condoms of cocaine totaling 756 grams while in custody. That is nasty. Same thing happened at the Vancouver International Airport last April. Ricardo Vasquez is charged with unlawfully importing cocaine into Canada and unlawfully importing cocaine for the purpose of trafficking.