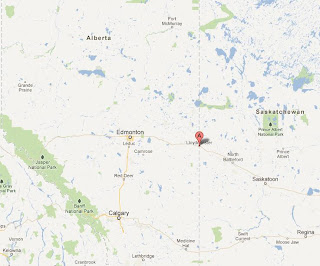 There was a shooting in Lloydminster, Alberta yesterday morning around 5:00 AM. I have a report claiming Bryan Gower 35 was shot in the head and dead on scene and that Mike Bexson was shot 5 times with conflicting reports as to whether or not he is still alive or is on life support.

The newspapers are confirming shots were heard and Bryan Gower was found dead on the scene. Then comes the same bizarre slogan, the investigation into the death of Bryan Gower is being treated as a suspicious death, pending the results of an autopsy that is scheduled in Edmonton tomorrow. Shot in the head and that’s suspicious. I’d say so. That’s like that SUV in Edmonton that was parked at a cemetery and was riddled with bullets. The police treated their death as suspicious. I don’t understand how they can say that with a straight face.

Reports are also coming in that the White Boy Posse is in town. That’s the Neo Nazi Hells Angels puppet club from Northern Alberta that sell drugs for the Hells Angles. Apparently this shooting was drug related. I’ll tell ya what’s suspicious. That police department is suspicious. That’s not protecting the integrity of an investigation, that’s withholding information from the public. It’s called suppression of crime statistics, namely homicide.