Another Targeted Shooting in Surrey 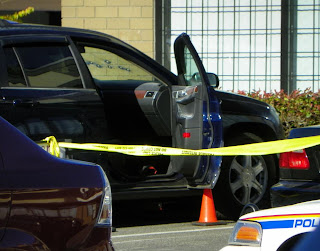 Another targeted shooting in Surrey this afternoon in broad daylight. When you look at the number of bullet holes in the front windshield I’d sure say it was targeted. The Vancouver Sun is reporting that the man gunned down in today’s shooting is the brother of a recently-convicted cocaine smuggler.

Sources identified the victim as Jag Johal, brother to Shminder Johal, who was sentenced to 18 years in prison in July for smuggling cocaine and guns into B.C. after a 2007 arrest. Johal was shot multiple times in broad daylight while sitting in the passenger side of a car in a parking lot at 68 Avenue and King George Boulevard.

A blog reader who was on scene after the shooting and took these pictures, claims they saw someone show up after the shooting that looked just like Rob Yews. Last we heard he was selling “shirts” in Yellowknife. If wonder if he’s in town and why.