Mahatma Gandhi was an inspiration 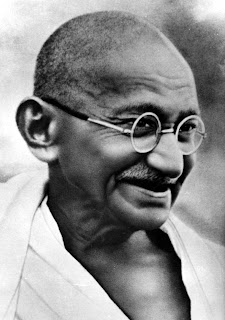 Mahatma Gandhi was truly an inspiration. Mother Teresa would often quote Gandhi saying he who serves the poor served God. Martin Luther King was also profoundly influenced by Gandhi for his nonviolent activism in confronting evil and righting wrongs.

So here we have one man who inspired two others who in turn did great things. The ripple effect of the pebble in the pond. I might add that Mother Teresa was a Catholic and Martin Luther King was a Protestant. Both were great Christians and great people.

Many people, myself included, get totally turned off religion when people start twisting scriptures to preach hate and intolerance. That is the exact opposite of their intent. Setting religion aside, there is one thing most of us can agree on: the existence of good and evil. We all know that murder and oppression is evil while service and charity is good. You don’t need religion to see that.

Gandhi was a Hindu in India who saw extreme violence between those professing to be Hindu and Muslim. Gandhi said "my Hinduism teaches me to respect all religions. The common factor of all religions is non-violence. Religion is outraged when an outrage is perpetrated in its name. Almost all the riots in the unhappy land take place in the name of religion, though they might have a political motive behind them. There is no room for goondaism in any religion worth the name, be it Islam, Hinduism or any other."

"If religion dies, then India dies. Today the Hindus and the Muslims are clinging to the husk of religion. They have gone mad. But I hope that all this is froth, that all this scum has come to the surface, as happens when the waters of two rivers meet. Everything appears muddy on top and underneath is crystal clear and calm. The scum goes to the sea of itself, and the rivers mingle and flow clear and pure."