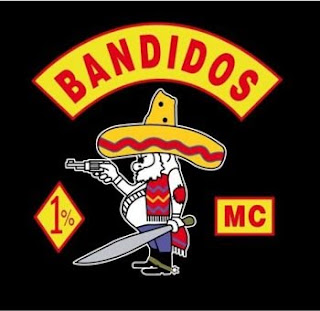 I forgot to mention I was speaking with someone who claimed they saw a group of about 40 Bandidios driving up the Coquihalla just north of Hope a few weeks ago. He said he also saw a group of Hells angels shortly thereafter travelling in a group heading in the same direction. It was as though they were having a meeting of some sort. Seeing both groups on the same freeway heading then same direction was suspicious indeed.

The source isn’t the type to make up some bs story. A recent comment on the blog claiming Bandidios have been sighted in the north Okanagan reminded me of the claim and is another confirmation of the sighting. We don’t really have Bandidios in BC. We know they’re in Bellingham. We remember the Bandidio massacre in Ontario. They sound like more drug dealers as opposed to a legitimate MC.

In November, 2006, Glenn Merritt of the Bellingham, Washington chapter was sentenced to four years in prison for drug possession and trafficking in stolen property. A total of 32 members were indicted in the associated investigation, on charges including conspiracy, witness tampering, and various drug and gun violations. Eighteen of those plead guilty. They were trafficking crystal meth and selling stolen Harleys. Maybe they wanna get a piece of Johnny Newcome’s racket.

Pretty significant since although the Bandidos started in Texas, some claim their HQ is now in Bellingham. We know some of the German Bandidios crossed over to join the Hells Angels. It’s all about the money to be made from the drug trade. And stolen motorcycles of course.

Here’s a rather amusing story of a member of the border Riders MC meeting some Badidios in Bellingham. I hadn’t heard of the border riders either. To each their own : )