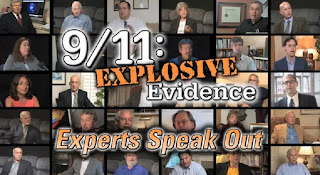 Speaking of 9/11 and the subsequent loss of civil liberties, there was a screening of a movie put out by Architects and Engineers for 9/11 Truth at Sullivan Hall in Surrey last night. The movie is called 9/11: Explosive Evidence - Experts Speak Out. It was very well done and worth seeing. This is the trailer and this is the movie in it’s entirety. You can purchase a copy of the DVD from their web site.

The second phase of the movie talked about the molten steel and the heat needed to melt iron. Jet fuel and office fires do not generate the heat required to melt steel. Thermite does and would explain the melted cars found at the base of the towers as well as the intense heat found at the site long after their collapse. Bulldozers were seen lifting red hot metal from the ruble. Witnesses described seeing molten metal flowing at the scene. Scientists claimed they found thermite in the 9/11 dust and refuted claims that the same elements are found in paint and chalk.

The third phase of the movie was something completely new. They brought in a team of psychologists specializing in trauma and grief. They explained that the reason many people adamantly refuse to look at the evidence is that it disturbs their world view. They compared a person’s belief system or their world view to their idea of their home. Showing pictures of a cross stitch home sweet home and a house with a white picket fence, they explained that if you attack someone’s world view they feel as though you are attacking their home, what makes them feel safe, and they will instinctively fight to defend their home or in this case their world view. Even if it defies the evidence.

It reminded me of the saying never tear down a fence without knowing why it was put up. People often build fences of denial to protect them from having a breakdown. Tearing that fence down before they are ready can be harmful. Yet not doing so can result in the loss of even more innocent lives. One psychologist talked about the grief she experienced when her world view was crushed by the 9/11 evidence. She said she had to go for a walk and really process the hurt and grief she felt. I think it was am amazing film and recommend people watch it. Despite the raging insults, I still believe 9/11 was an inside job and that concerns me deeply.