BC Rail and BC Hydro 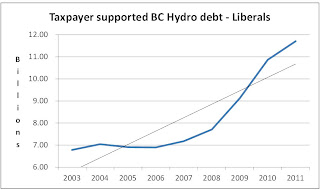 By far the biggest political corruption locally isn’t BC Rail it’s BC Hydro. I’m not talking about the privatization of Terasen Gas. That was just duplication. You already have guys from BC Hydro going to people’s homes to check the Hydro meters. Now you have another set of guys going to people’s homes to check the gas meters as well. It was more cost effective before.

Yet the privatization of Terasen Gas hasn’t caused the same avalanche of problems the privatization of the power brokers that sell power to BC Hydro has. That is how Gordon Campbell totally screwed us for generations to come. Most people, don’t realize BC Hydro was privatized. There was such a huge public outcry they split BC Hydro in two, privatized Terasen Gas and “left BC Hydro alone." Or so we thought.

In reality they left BC Hydro public but privatized the power brokers that sell power to BC Hydro at inflated rates. That is the inherit problem with privatization of public services. A private corporation is mandated to make a profit. It comes as no surprise to discover that the private power brokers sold power to BC Hydro at inflated rates. After all, that’s their mandate. To make a profit by ripping off consumers. Just like the big oil companies.

There has been media reports of BC Hydro's colossal debt that is ballooning out of control and keeps getting deferred. We are told that taxpayers will have to eventually bail them out. Either that or they will rationalize the deficit to privatize it completely so that black op will finally become complete.

BC Rail was the same old. The corrupt politicians sell off public assets to their friends at fire sale prices. Their friends then raise prices and make more money giving themselves huge salaries and a kickback to the dirty politicians that did the devil’s deal. We see the exact same thing with Gordon Campbell’s privatization of the power brokers. These are the same guys that were accused of false billing with Enron in California.

The Smart Meter scam is now completely out of control. On wood framed houses, putting a new smart Meter on an old wood framed base is a documented fire hazard. The logic solution, aside from abandon the project all together would be to start putting smart meters in new homes not ones already built. That would instantly deal with the liability of the fire hazard and it would be cost effective. When you build a new hoe, you need to put in a new meter anyways. That would only make sense.

Unfortunately, making sense isn’t on the table. They want to charge more for daytime usage so they want to proceed unilaterally with these flawed smart Meters that are setting wood framed houses on fire. Clearly, BC Hydro is no longer publically accountable and it should be. This should be Adrian Dix’s first order of business. To reverse the decision to privatize the power brokers that sell power to BC Hydro at inflated rates. If the power brokers and BC Hydro were once again the same entity as a public company, that devastating legacy of snowballing debt that Gordon Campbell has left us with would instantly be stopped.

The BC Rail scandal is peanuts in comparison. However, it would be nice to follow up on the initial money laundering charges that were dropped in the plea bargain where Gordon Campbell’s top aide were accused of laundering drug money through Victoria real estate. That should be publically examined. 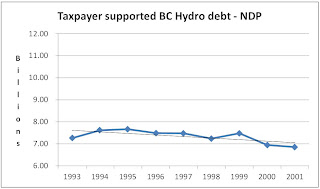