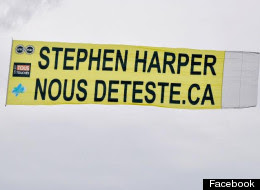 The Public Service Alliance of Canada says it hired a plane to fly over Ottawa and Gatineau on Saturday with a trailing banner that read, in French, “StephenHarperNousDéteste.ca” (Stephen Harper hates us).

“When the plane took off from Rockcliffe (airport), it was flying for about an hour-and-a-half and the pilot received a message that he must land his plane immediately and that the RCMP wanted to question him,” PSAC’s Larry Rousseau said.

According to Rousseau, the RCMP told the pilot the banner could constitute hate speech and a threat to Harper’s security, but the union - which paid $1,000 per hour for the three-hour flight - disagrees. “We don’t see criticism of the prime minister as being hate speech, we see it as being freedom of speech,” Rousseau said.

Global news is reporting that the RCMP denies it is responsible for making such a call and suggests Nav Canada - which oversees Canada’s skies - could be behind it. But Nav Canada said in an email Monday that it was not their call to bring the plane down.

“We have looked into this and can confirm that there was no instruction from NAV CANADA air traffic control to land that plane,” said Nav Canada’s media relations manager Ron Singer. “Please check directly with the RCMP. Nav Canada has no further comment.”

Huffington Post is reporting the union said authorities ordered the aircraft to land because it had entered Parliament Hill's restricted airspace, although the pilot reportedly knew about the restrictions and steered clear of them, a claim Nav Canada confirmed, according to Canada.com.

We saw the same banner fly over the Gay Pride Parade. Did it fly over restricted air space or not? Bringing down a plane for a political message is bad enough but lying about it is even worse. This needs to be followed up on because it’s illegal. It is a violation of the charter of rights and is another example of how Stephen Harper is eroding our rights as we speak.

Posted by Dennis Watson at 2:59 PM