Mother Teresa in a Special Edition of Time 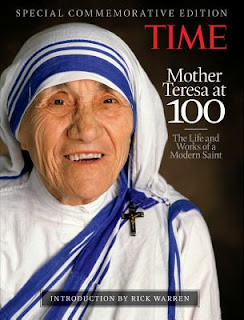 I was at the supermarket the other day and picked up a copy of Time magazine. They reissued a Special Edition all about Mother Teresa. My lucky day. Now I know you’re saying, so? What on earth does that have to do with the gang war? Personally I think it’s highly relevant. Both to our external world conflicts as well as to our internal gang conflicts.

Then a born again hater writes me and says, oh, you’re Catholic implying that Catholics aren’t Christians. Really? Catholics worship Christ. Ever see the stations of the cross? Yet just because I quote Saint Francis, that doesn’t make me Catholic any more than quoting Gandhi makes me Hindu or quoting the Dalai Lama makes me Buddhist.

To me, Mother Teresa is the image of a true Christian who walked the walk and didn’t just talk the talk. For me, pure religion is to visit the sick, feed the hungry, house the homeless, and yes visit those in prison. When I look at the gang war, I have seen three examples of born again hypocrisy that completely distorts the Christian message into something very different.

The first example is Tony Terezakis. He was a drug dealer for the Hells Angels in East Vancouver and video taped himself beating the life out of drug addicts who owed him money when he laughed and shouted Praise the Lord. He claimed in court that he was just filming a reality TV series called Bible Thumpers and that all victims were willing participants and were paid for their services in drugs. The court didn’t believe him. I suppose the fact that he couldn’t stop laughing when they played the videos in court made his story hard to believe.

Born again hypocrites know a handful of scriptures and wrest them to their own destruction. When I criticize Tony’s actions they quickly respond with Christ said judge not lest ye be judged. True, he did say that but we have to put it in context. I don’t think we have a right to judge Mary Magdalene or modern drug addicts because we don’t know what they went through to get them addicted. Once they’re addicted it is a very hard life. Yet we grow spiritually when we judge or discern good from evil and chose to follow good not to follow or support evil. Supporting drug dealers torturing addicts is evil. I don’t care what religion you claim to be.

Their next argument is that all you have to do to be “saved” is to confess that Jesus is the Christ. Once you do that you are saved and no matter what you do or who you hurt, you’re going straight to heaven. I do not believe that. I know some scriptures imply that. Those too have to be taken in context. When Jesus was on the earth, one of the miracles he performed was to cast out demons. On one occasion a group of demons recognized Christ and said why have you come to torment us before the time has come? They knew who he was and that knowledge didn’t save them. Likewise, the devil himself knows very well who Christ is and that knowledge doesn’t save him either.

Christ said “Every tree that bringeth not forth good fruit is hewn down, and cast into the fire. Wherefore by their fruits ye shall know them. Not every one that saith unto me, Lord, Lord, shall enter into the kingdom of heaven; but he that doeth the will of my Father which is in heaven. Many will say to me in that day, Lord, Lord, have we not prophesied in thy name? and in thy name have cast out devils? and in thy name done many wonderful works? And then will I profess unto them, I never knew you: depart from me, ye that work iniquity.”

Clearly Christ taught what we do is important. Saying Abracadabra then continuing to do evil will not save us simply because we live in a cause and effect world. As we sow, so shall we reap. I don’t believe hell is a place where God spanks us for eternity saying I told ya so.

There was a Chinese painting of Heaven and Hell. In the painting hell was a group of people gathered around a banquet table. The only way they could eat the food was with chop sticks that were longer then their arms. They had all this wonderful food in front of them but they were in torment because they weren’t able to eat it. The picture of heaven was the same banquet table with the same eating utensils. Only everyone there was happy and fulfilled. They were feeding each other.

Now there are two other cases of born again Christians sending me hate mail as they blindly support a drug dealer they know or are related to. There was a guy in Grand Prairie named Shaun Thexton who was arrested in the largest cocaine bust in Grad Prarrie’s history. He bragged about being a member of the Baseball Team which sources claim are a Hells Angels puppet club that enforce or protect the drug dealers that sell the Hells Angels drugs. He is also a fan of the TV series Anarchy bikers. His mother, wife and friend get all up in my grill claiming Shawn is a nice Christen father.

Let me tell you that nice Christians don’t sell drugs or work as an enforcer for drug dealers. That is what the Bible refers to as hypocrisy. When the Bible says the day will come when all the hidden works of darkness will be brought to light, that is one of them. I found it strangely ironic that one of the most vindictive drama queens supporting Shawn in Grand Prairie was Donnie McWhirter’s cousin in Kelowna. I found that somewhat suspicious she knew this guy and was so blindly supportive of what he was doing.

The other group of born again hypocrites in my grill of late are the codependent drama queens spreading all kinds of really offensive nonsense in support of Donnie McWhirter who just pled guilty to assaulting a woman in court who I might add was not his only female victim. That’s not something a good Christian does. By their fruits ye shall know them. It is strangely ironic that Donnie, also known as Blaze as in to smoke a joint, is so close to Joey Verma who has been charged with Brittney Irving’s murder. I want to know where Donnie was when Joey was accused of murdering Britney. Is his sister really a reliable alibi? People claimed Donnie really changed after that Easter. Why does Joey have a no contact clause with Donnie? You’d think that a good Christian would be a good influence on an accused murder. Apparently the courts disagree.

We know that Donnie McWhirter brags about his membership in the Independent soldiers, a puppet club for the Hells Angels. A good Christian doesn’t get involved in the BC Gang war where gangs are murdering each other for the right to sell drugs. Good Christians don’t do that but hypocrites do. Good luck with that. See you on the other side G. Good Christians don’t support their local 666. By the way, These six things doth the LORD hate: yea, seven are an abomination unto him: A proud look, a lying tongue, and hands that shed innocent blood.

I will add that I am not a member of the Roman Catholic Church although I do have many friends who are. I am not saying all born again Christians are hypocrites. I’m saying the ones sending me hate mail full of false allegations ragefully supporting drug dealers in the gang war are.

I am a constitutionalist. I believe in the freedom of religion. I shun extremism and I oppose hate and intolerance. In Ireland I am called a Republican because I believe in a free Republic. Not to be confused with the American political party.

People most certainly have the right to be Protestant. The flag for the Republic of Ireland is called the tricolor. It is green, white and orange. Green represents Irish Catholics, orange represents Irish Protestants and white represents peace between the two. When hate mongers like Ian Paisley burn that flag they are burning the olive branch of peace. It is a very unchristian act.

I’ve heard Ian Paisley’s hate and I do not support it. I’ve heard his jeers calling the Pope the anti Christ and I still say from what I saw, Ian Paisley was more of an anti Christ than the Pope was. Paisley preached hate and was paid to do so. That is the devil’s work.

Personally, I don’t like snake oil salesmen like Jimmy Baker or Jimmy Swaggart and I’m not comfortable with a circus style of religious service but that’s just me. To each their own. I just get upset with the flaming hypocrisy because it is full of intolerance and using God’s name to support drug dealers in the gang war is clearly using the Lord’s name in vain.