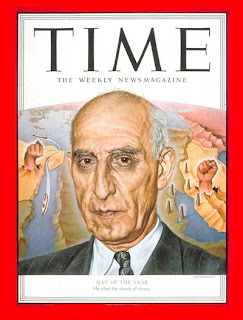 Canada abruptly closed its embassy in Iran and expelled Iranian diplomats in Ottawa. Iran supports Syrian president Bashar Assad. Well so does Russia. Does that mean we’re going to sever diplomatic ties with Russia? I don’t think Iran should have nuclear weapons but I don’t think China, India or any other country we are selling them to should either. Sarkozy said let’s trust Gadaffi with nuclear technology because we want to sell him a reactor. Then when he says he’s gonna buy one from someone else, we invaded and executed him. Stephen Harper is a dick wad. Remember Operation Ajax and Mohammad Mosaddegh? That is what this is about.

I am sick and tired of these ungodly oil wars being disguised as a quest for human rights. What about the Pakistan bombing? Somebody makes a deal to buy arms off Sarkozy. Then when they change their mind some intelligence agency blows them up.

If one of Israel’s enemies acquires nuclear weapons then that is a huge concern. The problem is that Mossad is so busy selling drugs and committing investment fraud along with the CIA, it’s hard to believe a word that comes out of their mouth either.

Nuclear power is problematic. Letting an enemy have nuclear power lets them have nuclear weapons. That’s why we shouldn’t be selling Candu reactors to China and India. Everyone rightfully freaks out when North Korea defiantly launches a missile test. Yet no one bats an eye when India conducts a nuclear test. Oh that’s OK because they’re an ally. It’s not OK. Just like it wasn’t OK for Iraq to use chemical weapons we sold them to use on Iran. That wasn’t OK either.

Look at the pattern. If a country has a nationalized oil program they all of a sudden become terrorists. That’s why Operation Fast and Furious existed. Other than making money off the arms and the cocaine, they wanted to sabotage the Mexican president’s war on drugs so they would elect a president that would follow through with the privatization of their oil.