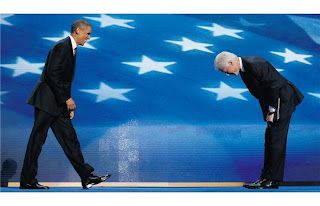 When I saw this picture in the Vancouver Province today it reminded me of a scene from mortal combat right when the opponents bow before squaring off. The media billed Clinton and Obama as former rivals because Obama ran against Hillary, yet it’s clear that Clinton supports Obama’s dream.

I had read a blogger quote Mitt Romney’s speech and I was shocked. Then when I checked the transcript of his speech it turns out he didn’t actually say a lot of those things and the blogger was being sarcastic. I did catch the end of Obama’s speech tonight. Ya gotta admit the guy is a very good speaker. George Bush was painful and irritating. He was like nails on the chalkboard. I couldn’t listen to him and had to change the channel whenever he spoke. Obama I can listen to. He says many heartfelt things that I support.

Between the two I have to admit the choice is clear. We the people or I the elite who will exploit and rip you off. Mitt Romney is a much better speaker than George Bush. Yet his unfailing support of Bush is suspect. He says avoid debt yet made millions loading companies with debt then forcing them to pay huge consulting fees as well as massive interest. He fed himself and the banks well.

Romney said it doesn’t matter what race you are but every time he raised the point I got the feeling to him it did. He talked about the United States because he wanted Democrats to vote for him but he kept repeating what was so horribly wrong with the past four years of Obama’s presidency. Not a word about the Tsunami of disaster that George Bush created. When you look at the last four years of Obama’s presidency, nothing went terribly wrong like it consistently did during Bush’s tenure. The banks or Wall street didn’t crash again. It’s just taking longer than anticipated to recover from all that bad debt George Bush left the country with.

In the past four years, no new country has been invaded for their oil. Well, except for Libya. There was no mortgae or stock scandals that crashed the banks or Wall Street. The fact that nothing terrible happened in the past four years like it consistently did under George Bush is a good thing.

I do have a concern with Bill Clinton. I’m told he gave a very inspiring speech. He is a very likeable person. Yet his documented ties to the drug smuggling and money laundering out of Mena, Arkansas when he was governor is very concerning. Tied of course to his pal George Bush Senior who started it all with the heroin smuggling during Vietnam.

When you Google Clinton body count you find a long list of people the Clintons know who died premature deaths of suspicious circumstances. I saw an episode of the TV series the Mathematician where he was calculating the odds of four people who new each other all dying of mysterious circumstances within a short period of time. He found the odds to be astronomical. In that episode the murders were tied to a cover up of voter fraud. All I’m saying is the number of people who have died of suspicious circumstances around the Clintons is shocking.

Hilary on the other hand looks just plain evil. She was implicated in that suspicious treasury note scandal when she was seen at a Swiss Bank account trying to recover it. Her law firm was tied to the same things her husband was involved with out of Mena. None of it was good. Obama was wise in not making her VP. That would have seen him assassinated faster than you can say President Johnston recall the wings.

I do think there is hope for America. I don’t think that hope rests with a politician. Just like Obama said that hopes rests with individuals who rise up to the challenges that face them and press forward with a consistent determination. Through small consistent acts, great things are accomplished. Politicians can’t be trusted. They need to be watched and restrained.

Romney’s slash and burn cannibalism doesn’t create jobs and build the economy. It cuts jobs and feeds the banks while his friends evade taxes in off shore accounts. That doesn’t build the country, it clear cuts it for the next generation. Honorable mention goes to the illustrious Ron Paul Revolution. Now that is hope.