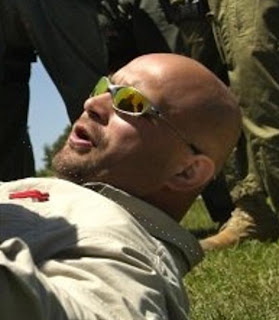 OK here’s one a reader sent in about a former Blackwater trainer named Slavko Ilic who was convicted of cocaine trafficking in Kitchener, Ontario back in 2008 after 35 kilograms of cocaine was found in the trunk of his car. The investigation of Ilic had all started after police had seized another 46 kilograms of cocaine and arrested two Kitchener men at the U.S. border in Sarnia two months prior. The size of the seizure and the location of the trafficking is one of those things that makes ya go hmmmmm. Or should I say aHA.

Well, guess what. The guy is out of prison already and according to the Cambridge Times holds one of two Adult Entertainment Licenses in Cambridge, just outside of Kitchener. He appeared before council’s general meeting on Monday, May 19th in hopes that Cambridge will enforce the bylaws and close down all the other unlicensed massage parlours. Trying to get a monopoly on the industry. Gee, where have we heard that before?

The question is, how on earth did this guy get a massage parlour license in the first place? Don’t they do criminal record checks in that shady industry controlled mostly by organized crime? That is suspicious indeed. He should not have a license for that anywhere in Canada.

Kristopher Pribic was later convicted of cocaine trafficking later on and was part of the same drug trafficking network in Kitchener. Kristopher's father Zivian, was a biker and cocaine dealer, an influence cited by the defence to help explain his career choice. A biker and a cocaine dealer in Ontario. Gee I wonder which club he was with. Sources claim Slavko was involved with Zivian Pribic. We know that Dominico Esposito is a Hells Angels associate in Kitchener. "When you arrest someone for drugs and ask who it's from, they say it's HA coke. Ninety per cent of the time it's HA coke," says a police officer in the Kitchener area, a Hells Angels stronghold.

Here’s a couple of links about Blackwater guys in Iraq doing steroids and cocaine.