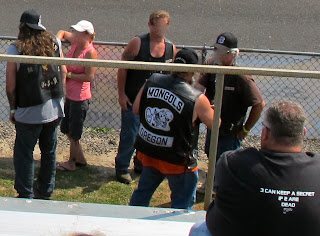 This one is priceless and sad at the same time. The Hells Angels were panhandling at a bike rally in Oregon selling their support your local crack dealer T-shirts. It was the Second annual Run to the Cascades in Redmond.

Other witnesses reported that the Hells Angels group intended to return with more people to settle the dispute, and at that point, sheriff’s deputies and police contacted fairgrounds Director Dan Despotpulos “and strongly recommended the event be closed in order to protect public safety.” The fair director agreed and they immediately began closing the event.

They sure ran to the cascades alright. The sad part is, no one needs or wants the Hells angles violence in their community not to mention at a biker rally. They are destroying it for everyone. People can say the Mongols started it this time but did they? The Hells Angels shouldn’t have booths selling things at biker rallies because they are a criminal organization that sells drugs. The East coast president was caught bringing crystal meth from California to Massachusetts.

In Vegas the Hells angels started a fight with Vagos. When they started losing the fist fight they pulled out guns and lost the gun fight too. There was Hells Angels violence at Sturgis as well. Clearly the Hells Angels should be banned from these events. They should not be allowed to have booths set up advertizing and pan handling for their criminal organization. Instead of cancelling the event, they should simply ban the Hells Angles. It has been said club business isn’t my business. It is when they sell crack or crystal meth in my community. It my business then. Just as it is if they bring violence to a bike rally I want to attend or a bar I want to drink at.