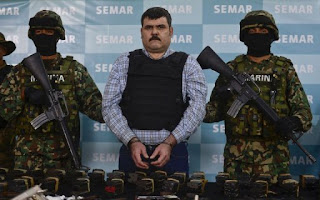 The dismembered bodies of 17 men were found Sunday on a farm in a part of central Mexico disputed by violent drug cartels. The bodies were naked, mutilated and stacked with chains around their necks. They had been killed elsewhere and dumped on the property.

Some 60,000 people have died in drug-related violence in Mexico since late 2006. On Friday, 16 dead bodies were found in northern Mexico. Nine of those dead were found hanging from a bridge in the northern border city of Nuevo Laredo.

Authorities have warned of an increase in gang violence following the arrest of Jorge Eduardo "El Coss" Costilla, the top boss at the Gulf drug cartel, one of the country's seven powerful crime syndicates. Costilla's arrest came one week after authorities detained Mario Cardenas, another top Gulf Cartel leader.

Now let’s take a step back and remember a recent headline about the HSBC getting caught laundering money for the Mexican cartels. The scandal drew in British trade minister “lord” Green after Labour warned he had "serious questions" to answer about the way the bank laundered money for drug cartels, terrorists and pariah states while he was at the helm.

Green was chief executive of Britain's biggest bank between 2003 and 2006 and was its chairman until 2010 when he resigned to take up a position of trade minister in the coalition government.

A damning Senate report - which concluded the bank had a "pervasively polluted" culture - covers the period 2004 to 2010 and shows that HSBC subsidiaries moved billions of dollars around the financial system from countries such as Iran and Syria as well moving cash for Mexican drug cartels.

However, “lord” Strathclyde, the leader of the upper house, brushed off Labour requests for Green to answer questions on the grounds that he is not accountable to peers for his business career. I kid you not. That is evil. Nothing but. OK so it’s time to re examine that scandal. Good thing I didn’t call it a conspiracy because no one would think it really happened when in reality it did.

Just like the BCCI’s laundering of drug money was tied to senior intelligence agencies, the HSBC’s money laundering appears to be tied to senior government officials. Kinda like the Rupert Murdoch wire tapping scandal. The banking spin doctors did a magnificent smoke and mirrors presentation on behalf of ll Green. They said of all people he must be the most shocked and disappointed because he has always been the moral compass of the banking industry. Bravo! What a hilarious performance. What’s worse is the people bought it. Sad but true. Why? Because the opposition parties weren’t allowed to ask him any questions about it. That is NOT a democracy. Oh right, monarchy and all.

I’m not going to get too much into it today, but I will. We need to follow up on the major banks that have been involved in money laundering for the Mexican cartels that were no doubt also tied to Operation Fast and Furious. We can’t let Obama’s Oliver north take the fall for this. We need to follow the money and follow up on the money laundering in the banking industry. Including but not limited to the Carroll Foundation Charitable Trust fraud tied to the HSBC.

The point I want to stress here is that a British politician who was CEO of the HSBC during the time it was accused of laundering drug money for the Mexican cartel is being protected from having to answer questions in the British Parliament because some idiot who calls himself a lord says he doesn’t have to answer any questions about his involvement in the money laundering on the grounds that he is not accountable to peers for his business career. That needs to be addressed. 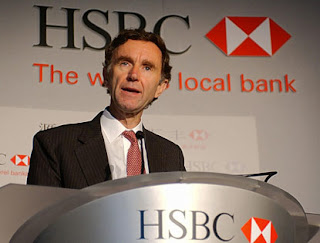