Tributes pour in for Peter Lougheed 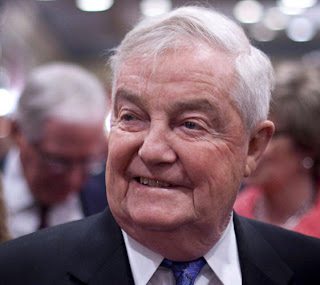 Peter Lougheed has passed away at the age of 84. He was a Conservative leader in Alberta who has been considered the best premier in the province's history. It’s refreshing to see a vigilant politician that is well respected after they leave office instead of being revealed to be a dirty scoundrel like so many others.

Peter Lougheed opposed the Keystone pipeline. However his opposition was based on economic reasons, rather than environmental. "We should be refining the bitumen in Alberta and we should make it public policy in the province," he said.

The U.S. State Department is considering a proposal to extend the pipeline which would carry oil from Alberta's oilsands to Texas with a decision expected by the end of the year. Environmentalists have been aggressively protesting the line saying the heavy oil, or bitumen, that would flow through the line is dirty, toxic and corrosive.

Lougheed told Anna Maria Tremonti of CBC Radio's The Current Tuesday the bitumen should be refined in Alberta."I would prefer...we process the bitumen from the oilsands in Alberta and that would create a lot of jobs and job activity," he said. "That would be a better thing to do than merely send the raw bitumen down the pipeline and they refine it in Texas that means thousands of new jobs in Texas." The Enbridge Partnership is based in Houston.