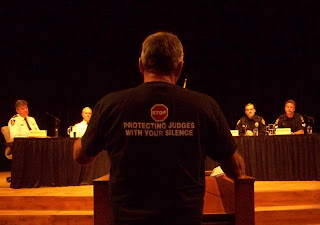 Last night there was a public rally at Port Moody city hall in response to the recent outbreak of gang violence. I attended the rally and noticed that when all the TV cameras showed up, many of the people went inside and were too afraid to be out in public on camera. There was a similar concern when Surrey had their rally against gang violence a few years ago, yet that rally was also well attended.

The mayor’s pr brainstorm was to open up the inlet theatre for the public to express their concerns and listen to a panel of police officers ready to address their questions. At first I spoke with the wife of one of the organizers of the rally and said what’s up with that? Is the mayor high jacking the rally? Where do you want people to meet? She said, no if the mayor is willing to listen to the people’s concerns then let’s hear him out. Fair enough said I so we did.

Of course the Aldergrove judicial revue board was there but before I address his important message, I want to touch on what some of the other local residents had to say. Several mothers spoke and expressed their fear of the outbreak of gang violence in their community. One mother’s heartfelt plea wasn’t just her fear of her or her daughter being hit by a stray bullet, but of her daughter witnessing a dead body lying in the street. She doesn’t want her children to have to deal with that.

Another mother raised a very good point. She said in their neighborhood, they had a problem with youth drinking and having loud parties that would cause problems for the neighbors. She said that the Port Moody police were very good at responding to 911 calls and since they became aware of the problem, increased patrols in the area and increased their presence. As a result of the increased police presence, the trouble makers left and went somewhere else.

Taking that logic one step farther, she asked if the police had stepped up patrols and increased their presence at the rec centre when one gang member was executed. The officer did go into detail about many other things and she kept coming back and asking point blank, have patrols at the rec centre increased? The final answer was no because the rec centre is safe and it was just fate that the shooter found the gang member there when he shot him.

Then the well meaning officer said something that I found disturbing. He said they knew where all the gang members live and do regular surveillance around their homes. Then reiterated that the rec centre was a safe place. I’m sorry but I do have a problem with devoting police resources to protect gang members homes. In fact that could be one of the reasons they are shot in public when they leave their home.

One older gentleman stepped up to the mike and said he lived in the same building the Bacon brothers lived in when they stayed in Port Moody. He said he was kinda sorry to see them leave because when they lived there they had round the clock police presence. Sad that regular citizens can’t get that kind of protection.

I know the police are well meaning. I understand the logic in that if a rival shoots a gang member at his home, that will endanger the neighbors in that community, but the round the clock police protection the Bacon brothers got in their Abbotsford home was a shameful misuse of public resources. Increasing a public police presence at the Port Moody rec centre will deter gang members from going there.

In all fairness, the police from the VPD and the Port Moody PD as well as the mayor, all gave very good presentations. One thing the mayor and one of the other officers kept stressing was how the BC judicial system has improved lately. That is ridiculous. We aren’t seeing it. Yes a Peter Leask decision was appealed and overturned, but Peter Leask is still sitting on the wrong side of the bench when he should be in jail and that crime still needs to be addressed.

This speaker was from Aldergrove where his community became outraged with the BC judicial system because of the revolving doors around property theft. People were caught stealing in their neighborhood over and over again and they kept getting released to reoffend. The VPD came up with a proposal called 30 strikes and you’re out. As absurd as that sounds, they weren’t kidding. There is a huge problem with prolific offenders. The more crimes they commit the less time they spend in jail.

The Mayor pointed out that even reporting property theft to the police is important because nine times out of ten that person is stealing to support their drug habit. When that person gets some more money to buy drugs, he calls his dial a dope dealer to bring him some. Then when that dealer comes in to that neighborhood, he brings the risk of gang violence with him. In that sense property theft does relate to gang violence.

So too with the judicial absurdity about prolific offenders. That is feeding the gang war by enabling the criminals to buy more drugs which causes more fighting over who’s going to make the money off that deal. So clearly, judges are the problem. From throwing out good evidence and letting kingpin gang leaders go free, to filling the gang leaders pockets with the proceeds of prolific crime, it does all stem around the judges.

Getting away with Murder

Having said that, there is one other point raised that sparks a civic call of duty. Another mother expressed her concern that these gang members were getting away with murder. She said I guarantee you that if I went and shot someone in broad daylight, the police would be knocking on my door in a mater of days. Someone sees a five foot nothing woman shoot someone in broad daylight, they’re going to get her description and a plate number and the police will come knocking on her door.

Her concern, which was shared by others, is how brazen the gang violence has become. Not only no regard for public safety, but shooting people in broad daylight as though no one is going to see them or get a plate number. That is a valid concern. It behooves us as citizens ready to respond to the call of duty, not to intervene in a gang shooting but to remember plate numbers, and descriptions as they’re ducking for cover. Cell phones can take pictures as well as dial 911.

Her ultimate concern was that these gang members are literally getting away with murder. They are rarely caught and when they are the judges throw out good evidence or give them a slap on the wrist. This is true. Judges are still the problem. 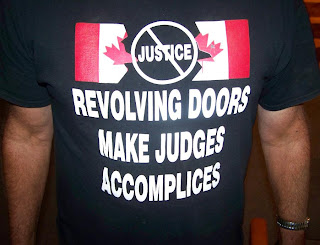