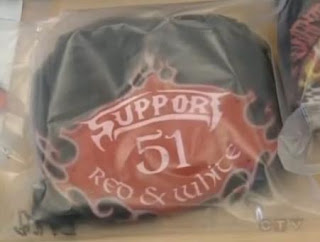 Here’s an important link that Freddy posted. It’s another example of one step forward, one step back. The Edmonton Journal is reporting that: Alan Peter Knapczyk, a 38-year-old Hells Angel member, and John Reginald Alcantara, a 39-year Hells Angels prospect, were convicted on Aug. 17 of conspiring to traffic cocaine and conspiring to traffic cocaine for the benefit of a criminal organization, although neither of them were directly involved with the drugs themselves.

Instead, both men were involved with protecting the cocaine business from competitors and theft and were not directly involved in the purchase or distribution of the drugs. Justice Sheila Greckoll said the men were “motivated by greed” and “responsible for causing harm to the community of Fort McMurray.” Three cheers. They get ten years for enforcing for the drug dealers. Using the name and reputation of the Hells Angels to protect the drug dealers they supply. That is one small step for man, one giant leap for mankind.

The Edmonton Hells agnels not only supplied the White Boys Posse a neo-Nazi group of drug dealers selling cocaine all over northern Alberta, but they even stamped their logo on bricks of cocaine. 51 stands for EA Edmonton Angels just like 81 stands for HA Hells Angels. We're still waiting to hear about similar charges in the Edmonton Hells Angels cocaine trafficking ring in Grand Prairie as well.

Alcantara is already serving a 14-year prison sentence on separate drug charges that were connected to the Caines investigation. Eight years of his new sentence will be served concurrently, while the last two are consecutive. Basically concurrent sentences mean zero sentence so the 10 years has been reduced to two but the question is, what on earth did he do to get a 14 year sentence?